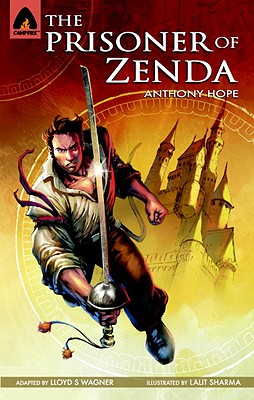 Swordfights, midnight rides, castles and dungeons... The Prisoner of Zenda is the classic romantic adventure!

When Rudolf Rassendyll decides to take a journey to see his distant cousin crowned king of Ruritania, it soon becomes apparent that it is not going to be a routine trip. The first indication of this comes with the realization that he bears an uncanny resemblance to his cousin. Added to that there is the discovery that Black Michael, a relative of the rightful king, is determined to prevent the coronation taking place, so that he might receive the crown himself.

What follows is an adventure involving abduction, imprisonment and deceit. As the story races to its conclusion, Rudolf Rassendyll faces choices that will determine not only his future, but the futures of King Rudolf, Princess Flavia and the whole of Ruritania.

Published in 1894, The Prisoner of Zenda launched Hope's writing career, and was followed by the sequel, Rupert of Hentzau.

Anthony Hope was the pen name of Sir Anthony Hope Hawkins. Born in London on 9th February 1863, Hope studied at the prestigious Marlborough School before attending Balliol College, Oxford University. He received a first-class degree and, in 1887, went to work as a lawyer. An ambitious man, Hope began writing stories in his free time and published his first novel, A Man of Mark, in 1890. Most of his novels were adventure stories, typified by The Prisoner of Zenda, his best-known work.
Based on The Prisoner of Zenda's success, Hope gave up his legal career and began writing full time, publishing many popular novels, plays and short stories. Rupert of Hentzau, the sequel to The Prisoner of Zenda, was published in 1898, and continued where The Prisoner of Zenda left off. Among the many books Hope published are Tristram of Blent (1901), Double Harness (1904), Sophy of Kravonia (1906), The Heart of Princess Osra (1896) and Lucinda (1920).
Hope married Elizabeth Somerville in 1903, and was knighted in 1918 for services to his country during World War I. Sir Anthony Hope Hawkins died at his home in Surrey on 8th July 1933.