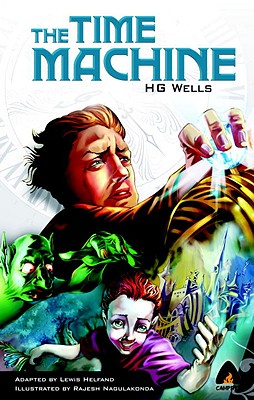 What would you do if you could travel in time?

An intrepid adventurer, known simply as the Time Traveller, meets his friends for dinner one night. During the conversation, he baffles them with his wild ideas about moving forwards or backwards in time. His claims are met with disbelief. Even when he proves his theory with a real-life experiment, his associates simply claim that he is a trickster - a magician. Yet, a week later, he enthralls his acquaintances yet again. He tells a story so unbelievable that it can't be true... or can it?

The Time Traveller's tale tells of our courageous explorer's discoveries in another time. Does he find intelligence and technology beyond his wildest dreams? Or is the world filled with dreaded monsters? There's only one way to find out...

Considered one of the pioneers of science fiction, Herbert George Wells was born on September 21, 1866 in England.

Still considered one of the greatest science fiction novels of all time, The Time Machine was the first in a string of successful books in which Wells's unique take on unusual subjects came to define certain genres. His tales of alien invasions in The War of the Worlds, invisibility in The Invisible Man, and eugenics in The Island of Doctor Moreau have influenced generations of writers.

While most famous for his work in science fiction, Wells worked on a variety of genres. An advocate of social change and member of the British socialist group, the Fabian Society, Wells spent much of his later years writing about his views on politics and society, and even offered predictions about the direction in which the world was headed. HG Wells continued writing until his death at the age of 79 in 1946.

"Kudos to Campfire for such a fun effort with such a fun story. With [48] other titles hitting the market over the next two years, distribution through Random House, and brilliant art in each based on the previews I've seen, I expect Campfire to become a major player in the graphic novel market."