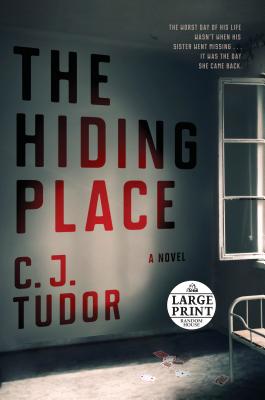 By C. J. Tudor
Unavailable to Order
Hard to Find

THE HIDING PLACE by C.J. Tudor

There's a new dark star among the authors of psychological thrillers. Her name is C.J. Tudor, and The Hiding Place is killer. If Jim Thompson and Shirley Jackson had a love child, it might look like this hardboiled, Gothic-suspense nightmare, white-knuckled and swaddled in dreadful atmosphere. Summoned by a message that "it's happening again," Joe returns to the small town of his childhood, seeking revenge against the forces that destroyed his kid sister. He moves into a house where a mother killed her son before taking her own life, scrawling "Not my son" in blood after murdering the boy. Joe knows a new generation of kids will share his sister's fate if he can't defeat the darkness of the hiding place. Complicating matters is, Gloria, a blonde bombshell enforcer, who's tracked Joe down to ruthlessly collect his gambling debts, and picks off Joe's enemies to save him for herself. A pit of lies swallows Joe as he fights to stop history from repeating itself, but the lies he tells himself are the blackest hole of all. Thriller and horror fans will love this gripping tale, which packs a chilling double-twist that ties it like a bow.

“The Hiding Place is terrific in every way.”—Lee Child

From the acclaimed author of The Chalk Man comes an unputdownable psychological thriller about a man who returns home to settle old scores—and uncovers a secret darker than he could have imagined.

Joe never wanted to come back to Arnhill. After the way things ended with his old gang—the betrayal, the suicide—and what happened when his sister went missing, the last thing he wanted to do was return to his hometown. But Joe doesn’t have a choice, not after a chilling email surfaces in his inbox: I know what happened to your sister. It’s happening again . . .

Lying his way into a teaching job at his former high school is the easy part. Facing off with onetime friends who aren’t too happy to have him back in town—while avoiding the enemies he’s made in the years since—is tougher. But the hardest part of all will be returning to the abandoned mine where his life changed forever, and finally confronting the horrifying truth about Arnhill, his sister, and himself. Because for Joe, the worst moment of his life wasn’t the day his sister went missing.

It was the day she came back.

“Tudor maintains a tone of creeping dread throughout the book, of something lingering always in the background, coyly hiding its face while whispering promises of very bad things to come. In the last quarter, however, she goes for broke with outright horror, giving readers an effective jolt of adrenaline that will carry them all the way to the terrifying conclusion. Readers won’t know what hit them. Tudor came out swinging with The Chalk Man, but this one puts her firmly on the map. Not to be missed.” —Kirkus

“Tudor has crafted another fantastic horror-tinged thriller (after The Chalk Man, 2018) in the vein of John Connolly and Brendan Duffy" - Booklist

"Some writers have it, and some don't.  CJ Tudor has it big time - The Hiding Place is terrific in every way." – LEE CHILD

“With The Hiding Place, CJ Tudor has proven that she is a true master at creating perfectly dark, highly propulsive, and tightly coiled mysteries that are utterly impossible to put down. From page one, the reader is pulled in with a gathering sense of dread, and taken on an addictive, thrilling ride to the very last page.” – AIMEE MOLLOY, New York Times Bestselling author of The Perfect Mother

“Dark, gothic and utterly compelling, The Hiding Place pulls off a rare combination – an atmosphere of unsettling evil along with richly nuanced characterisation.” - JP DELANEY

"Deliciously creepy, impeccably plotted and laced with both wicked humor and genuine shocks, The Hiding Place is the kind of read-under-the-covers thriller you didn't think people wrote anymore. Lucky for us, C.J. Tudor still does. An absolute corker of a book." -- Riley Sager, New York Times bestselling author of FINAL GIRLS and THE LAST TIME I LIED

“Gripping and dark, The Hiding Place descends like its very own mine shaft, getting creepier the further you go. You’ll race to the finish.” – ROZ NAY, internationally bestselling author of Our Little Secret

"Razor-sharp writing and masterful plotting drive this dark story about a small town, buried secrets, and ghosts from the past. Witty and compelling all at once, The Hiding Place is a must read page-turner!" – WENDY WALKER, bestselling author of All Is Not Forgotten

"Delicious in every way. A deliciously creepy story, deliciously told. Storytelling like a siren's song: your hair will prickle and stand on end but you won't be able to tear your eyes from the page. If you like Tana French, you will love, love, love C.J. Tudor.” – ALMA KATSU, author of The Hunger

“WOW WOW WOW! CJ Tudor’s follow-up to her impressive debut is superbly chilling and delightfully creepy. Smartly written and brilliantly plotted, here is a book that crawls under your skin and hooks on until you reach that jaw-dropping ending.” – CJ COOKE, author of I Know My Name