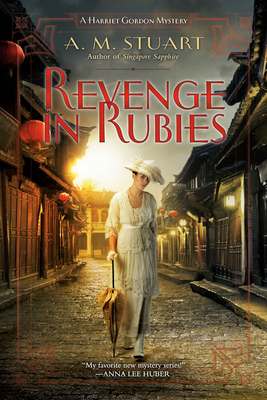 This is book number 2 in the A Harriet Gordon Mystery series.

When Harriet Gordon receives word from a friend about a tragic death, she and Inspector Curran are thrust into a web of family secrets that threatens to destroy them both in this all-new mystery from the author of Singapore Sapphire.

Singapore, 1910—Harriet Gordon has found fulfillment at last. Her young ward, Will, has settled into his new home with Harriet and her brother, Julian. And Harriet’s employment as a typist at the Straits Settlements Police Force has given her an intriguing way to occupy her time and some much-needed financial independence. But when her friend and employer, Inspector Robert Curran, is called to the scene of a brutal murder and Harriet is asked to comfort the victim’s family, her newfound sense of contentment is abruptly shattered.

Sylvie Nolan, the new and much-younger wife of Lieutenant Colonel John Nolan, has been bludgeoned to death in her bedroom. The tightly knit military community in Singapore quickly closes ranks to hinder Curran’s investigation, and Harriet realizes that her friendship with the colonel’s sister might prove useful. But to get close enough to the family’s secrets, Harriet must once again face her painful past, and Curran is forced to dredge up some long-buried secrets of his own. And when more shocking deaths occur that all seem linked to Sylvie’s murder, Harriet and Curran discover that they too are in the sights of a callous killer. . . .

Born in Africa, author A. M. Stuart has traveled extensively and has lived in Kenya, Singapore and Australia. She is the author of the Guardians of the Crown historical romance series published by Harlequin Australia, and her books have been nominated for multiple international awards.