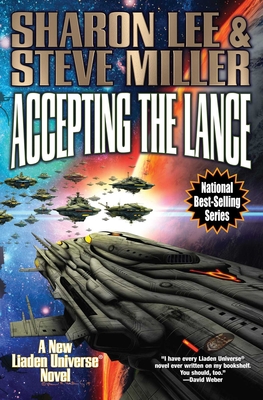 This is book number 22 in the Liaden Universe® series.

Exiled from Liad after bombing a city to save it from The Department of the Interior’s infernal weapons and plans, Clan Korval has gone to ground on the backwater planet Surebleak, whose people are as untamed as its weather.

Far beyond the surface of frigid Surebleak, Korval’s far-flung trade network needs a serious reset. From flagship Dutiful Passage to the experimental self-aware Bechimo, the clan’s ships are prowling space lanes seeking trade. Meanwhile, old tech from a failed universe and the machinations of the mysterious Uncle are coalescing into either a dangerous opportunity or a nefarious trap.

And the Department of the Interior is not done with Clan Korval yet. They seek a final fully reckoned revenge, with Surebleak and Korval’s ships and people everywhere in the crosshairs.

About Accepting the Lance:

"Accepting the Lance is a tour de force! So many threads woven, so many pieces moved on the board, old and new friends met, this book is an extraordinary installment in a brilliant series. I stayed up till 3 a.m. reading it and I have zero regrets. An incredible ride of a book!"—Nalini Singh

Praise for The Liaden Universe®:

"This series [is] . . . the premier place to find good romantic SF adventure. . . . strong characters finding their own way (and, often, each other) in an action-packed galaxy of worlds. . . . Every story stands on its own; readers don’t have to be familiar with the Liaden universe. Those who have had the pleasure, though, will find many connections to existing tales.” —Analog on A Liaden Constellation, Volume 1

"As always, this intelligent space opera focuses on matters of manners, honor, duty, and clever repartee; violence is rarely the solution, and subtlety wins out over overt force. . . . [Neogenesis] provides thoroughly satisfying progression or resolution for multiple threads and will feel comfortably familiar for fans of Korval’s escapades."—Publishers Weekly on Neogenesis

“Every now and then you come across an author, or in this case, a pair, who write exactly what you want to read, the characters and personalities that make you enjoy meeting them. . . . I rarely rave on and on about stories, but I am devoted to Lee and Miller novels and stories.”—Anne McCaffrey

“These authors consistently deliver stories with a rich, textured setting, intricate plotting, and vivid, interesting characters from fully-realized cultures, both human and alien, and each book gets better.”—Elizabeth Moon

“[D]elightful stories of adventure and romance set in a far future . . . space opera milieu. It’s all a rather heady mix of Gordon R. Dickson, the Forsythe Saga, and Victoria Holt, with Lee and Miller’s own unique touches making it all sparkle and sizzle. Anyone whose taste runs toward SF in the true romantic tradition can’t help but like the Liaden Universe.”—Analog

“[T]he many fans of the Liaden universe will welcome the latest . . . continuing young pilot Theo Waitley’s adventures.”—Booklist on Saltation

“[A]ficionados of intelligent space opera will be thoroughly entertained. . . . the authors' craftsmanship is top-notch.”—Publishers Weekly on Lee and Miller’s popular Liaden Universe® thriller, I Dare

Maine-based writers Sharon Lee and Steve Miller teamed up in the late 1980s to bring the world the story of Kinzel, an inept wizard with a love of cats, a thirst for justice, and a staff of true power. Since then, the husband and wife have written dozens of short stories and twenty plus novels, most set in their star-spanning Liaden Universe®.

Before settling down to the serene and stable life of a science fiction and fantasy writer, Steve was a traveling poet, rock-band reviewer, reporter, and editor of a string of community newspapers. Sharon, less adventurous, has been an advertising copywriter, copy editor on night-side news at a small city newspaper, reporter, photographer, and book reviewer. Both credit their newspaper experiences with teaching them the finer points of collaboration. Sharon and Steve passionately believe that reading fiction ought to be fun and that stories are entertainment. Steve and Sharon maintain a web presence at http://korval.com.