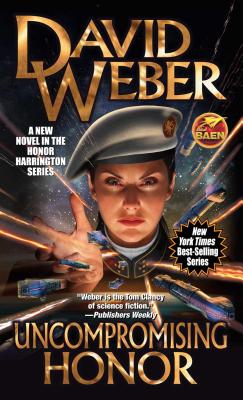 The Solarian League—for hundreds of years they have borne the banner of human civilization. But the bureaucratic Mandarins who rule today’s League are corrupt and looking for scapegoats. They’ve decided the upstart Star Kingdom of Manticore must be annihilated.

Honor Harrington has worn the Star Kingdom’s uniform for half a century. So far, hers has been a voice of caution. But now the Mandarins have committed atrocities such as the galaxy has not known in a thousand years. They have finally killed too many of the people Honor Harrington loves.

Now Honor Harrington is coming for the Solarian League. And Hell is riding in her wake.

“…a balanced mix of interstellar intrigue, counterespionage, and epic fleet action…with all the hard- and software details and tactical proficiency that Weber delivers like no one else; along with a large cast of well-developed, believable characters, giving each clash of fleets emotional weight.”—Booklist

“. . . moves. . . as inexorably as the Star Kingdom’s Grand Fleet, commanded by series protagonist Honor Harrington. . . . Weber is the Tom Clancy of science fiction. . . . His fans will relish this latest installment. . . .”—Publishers Weekly

“[E]ach book contains food for multiple tastes [and] provides a feast. Readers . . . will get enough hardware-geek stuff and space battles to make their palms sweaty. Those who love political intrigue will nigh have their brains explode from following all the tentacles of strategy. . . .Those who love fully drawn characters with everything at stake . . . will have lots to cheer about. And those who love bad guys committing atrocious deeds, only to get what they deserve from the good guys, will sleep contentedly at night because justice has been served. Uncompromising Honor provide[s] a long, luxurious trip. . . [that is] emotionally and intellectually gratifying. . .”—New York Journal of Books-West

“Weber’s books [are] enjoyable as fiction and profound as works of art. . . . [in them] great power competition makes its way into the space age on a galactic scale. . . . Battles are described in vivid, suspenseful detail. . . . both sides grapple to do their duty as they understand it . . . [and] it is the human touches that make this book so gripping. . . . Weber’s fans will greatly enjoy Uncompromising Honor [and be left] eagerly awaiting the next installment of this magnificent series.”—Mark Vandroff, Center for International Maritime Security

About Shadow of Freedom, #18 in the Honor Harrington series:

“This entry is just as exciting as Weber’s initial offering. . . .The result is a fast-paced and action-packed story that follows [our characters] as they move from reaction to command of the situation. Weber builds Shadow of Freedom to an exciting and unexpected climax.”—Daily News of Galveston

With more than eight million copies of his books in print and 33 titles on the New York Times bestseller list, David Weber is a science fiction powerhouse. In the vastly popular Honor Harrington series, the spirit of C.S. Forester’s Horatio Hornblower and Patrick O’Brian’s Master and Commander live on—into the galactic future. Books in the Honor Harrington and Honorverse series have appeared on 21 bestseller lists, including The Wall Street Journal, The New York Times, and USA Today. Additional Honorverse collaborations include the spin-off miniseries Manticore Ascendant with New York Time best-selling author Timothy Zahn, and with Eric Flint, Crown of Slaves and Cauldron of Ghosts contribute to Weber’s illustrious list of New York Times and international bestsellers.