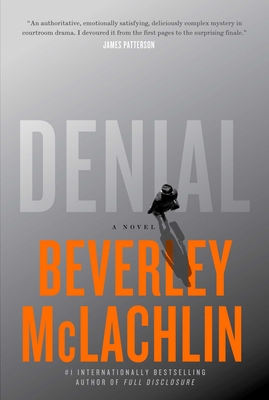 From the former Chief Justice of Canada and #1 bestselling author of Full Disclosure comes a taut new thriller starring tough-as-nails defense attorney Jilly Truitt in a murder case that makes her question her own truths.

When everyone is in denial, how do you find the truth?

Jilly Truitt has made a name for herself as one of the top criminal defense lawyers in the city. Where once she had to take just about any case to keep her firm afloat, now she has her pick—and she picks winners.

So when Joseph Quentin asks her to defend his wife, who has been charged with murdering her own mother in what the media are calling a mercy killing, every instinct tells Jilly to say no. Word on the street is that Vera Quentin is in denial, refusing to admit to the crime and take a lenient plea deal. Quentin is a lawyer’s lawyer, known as the Fixer in legal circles, and if he can’t help his wife, who can?

Against her better judgment, Jilly meets with Vera and reluctantly agrees to take on her case. Call it intuition, call it sympathy, but something about Vera makes Jilly believe she’s telling the truth. Now, she has to prove that in the courtroom against her former mentor turned opponent, prosecutor Cy Kenge—a man who has no qualms about bending the rules.

As the trial approaches, Jilly scrambles to find a crack in the case and stumbles across a dark truth hanging over the Quentin family. But is it enough to prove Vera’s innocence? Or is Jilly in denial herself?

Thrumming with tension, Denial is a riveting thriller about the lengths we will go to for the ones we love and the truths we hold dear.

Beverley McLachlin was the Chief Justice of Canada from 2000 to 2017. She is the first woman to hold that position and the longest-serving Chief Justice in Canadian history. Her memoir, Truth Be Told, was an instant bestseller and won the prestigious Writers’ Trust Shaughnessy Cohen Prize and the Ottawa Book Award for Nonfiction. Her debut novel, Full Disclosure, which introduced readers to Jilly Truitt, was a #1 national bestseller and was shortlisted for the Arthur Ellis Best First Crime Novel Award. In 2018, McLachlin became a Companion of the Order of Canada, the highest honour within the Order. Visit her at BeverleyMcLachlin.com.

“An authoritative, emotionally satisfying, deliciously complex mystery in courtroom drama. I devoured it from the first pages to the surprising finale.”
— JAMES PATTERSON

“In the tradition of great courtroom novels Anatomy of a Murder and Presumed Innocent, McLachlin’s Denial captures the life of a defence lawyer embroiled in a high-stakes murder trial, with twists and turns to the very last page. Jilly Truitt is a character readers are going to cheer for over and over again.”
— ROBERT ROTENBERG, bestselling author of Downfall

“We know Beverley McLachlin as a pioneer—the first woman to serve as Canada’s Chief Justice. But now we’ll know her for something else entirely: gripping crime fiction. . . . Full Disclosure is a well-crafted page-turner in the vein of international bestsellers like Sarah Vaughan’s Anatomy of a Scandal, and is packed with courtroom drama, intrigue, plot twists, and fascinating details about our criminal justice system. Written in an accessible voice, with a fast-moving narrative, this is beach, cabin, and airplane reading at its best.”
— Vancouver Sun

“Gripping, intricate, and full of heart, Full Disclosure is a bold debut by the former Chief Justice of the Supreme Court of Canada. Novelist Beverley McLachlin is a force to be reckoned with.”
— KATHY REICHS, bestselling author of the Bones series

“For page-turning legal thrillers, it’s hard to do better than this one, and not just because it’s by the ultimate insider: the recently retired Chief Justice of the Supreme Court of Canada.”
— Maclean’s

“Totally compelling: McLachlin brings her wit and intelligence—and unrivalled experience—to this courtroom drama, which brilliantly illuminates the games lawyers play and the risks of wrong choices. The main character, Jilly Truitt, is a woman I want to meet again.”
— CHARLOTTE GRAY, bestselling author of The Promise of Canada

“McLachlin puts her experience on the Court to good use, writing a taut legal thriller with great twists and turns that will keep readers guessing to the very end.”
— CATHERINE McKENZIE, bestselling author of Six Weeks to Live

“What we have here is the inquiring mind of the lawyer and jurist, now bold new writer. . . . Beverley McLachlin has created something real and visceral. Hats off, former Chief Justice of the Supreme Court of Canada, and all rise for what we hope will be the encore.”
— Canadian Lawyer Magazine