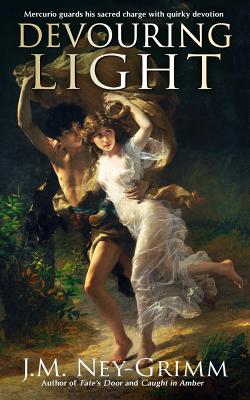 Mischievous Mercurio guards the planet Mercury-his sacred charge-with quirky devotion. He loves the oddball chunk of rock, with its illusion of retrograde motion and its out-of-sync orbit and spin.

Almost as much as he loves playing pranks.

But when Earth's guardian Gaia bids Mercurio to organize a circus act for Sol's birthday celebration, the joke's on him.

While Mercurio wangles his way around the captious refusals of his would-be stilt-walkers and clowns-"No, no, and no "-the somber guardian of Pluto plots a darker scheme.

With the subtle delight, clever misdirection, and teasing wordplay that Mercurio himself enjoys, J.M. Ney-Grimm tells a tale of steeply rising stakes in a clockwork solar system ruled by the gods of ancient Rome.

"It's no secret...that I have favourite writers. J.M. Ney-Grimm is one of them, and with good reason-her writing style is unique, and engrossing." -James J. Parsons, Speaking to the Eyes

"...the world depicted is magical, but the people are very real." -M.A. Dunn

"Her work compares favorably with Robin McKinley and Patricia McKillip ...I'm really pleased to have discovered her " -Mira

Draco loomed large, reptilian, and uncooperative in the center of his refuge. His tails cracked, emphasizing his displeasure.

"Would she let me devour her, younger cousin?" he asked, a sly note edging his harsh tones.

Mercurio slipped on a spill of star dust, swallowed complaint, and sprang upward. Might as well spread his sandal wings. He maneuvered away from Draco's twitching tails toward the dragon's face.

A miasma of burning cold belched from his gullet.

Ah Not directly in front then. Right.

Draco snickered, and Mercurio shuddered. A blast furnace opening its maw, that's what it sounded like, despite its chill.

Too true. But surely Mercurio possessed something Draco wanted. "Name your price " he blurted. Uh, oh. That was a mistake. Cronos only knew what the dragon might come up with. And once he settled on something, he wouldn't take anything else.

J.M. Ney-Grimm lives with her husband and children in Virginia, just east of the Blue Ridge Mountains. She's learning about permaculture gardening and debunking popular myths about food. The rest of the time she reads Robin McKinley, Diana Wynne Jones, and Lois McMaster Bujold, plays boardgames like Settlers of Catan, rears her twins, and writes stories set in her troll-infested North-lands. Look for her novels and novellas at your favorite bookstore-online or on Main Street.