A Matter of Time: Book 1 (Hardcover) 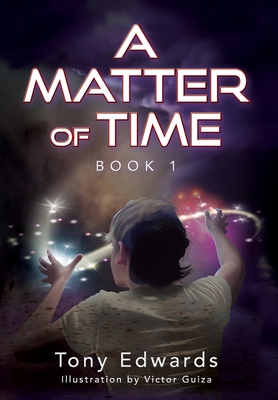 Book One of the brand new A Matter of Time series tells the story of seventeen-year-old Charlie Henderson. Charlie has lived a sheltered, relatively uneventful life in Fresno, California-but he's always wanted more-lots more. As his senior year of high school approaches, he vows to finally break out of his shell, leave his nerdy reputation behind, and become popular like his younger sister, Maddie. At first, everything seems to be going well for him-until one night when he, Maddie, and three of their friends are mysteriously transported back in time. They suddenly find themselves in a gosh-awful mess. With nothing but the clothes on their backs, the five teens must navigate this new place and time . . . a world filled with more chaos and danger than they have ever imagined Charlie and his friends are trapped in a place of otherworldly tension as events unfold under a shadow of secrecy. Have they become victims of someone else's twisted idea of fun? As things escalate and multiple plots overlap, they all experience a surge of fear, like an uncoiling snake that slithers through them, turning their thoughts back to the ho-hum world they were yanked out of. Perhaps it wasn't so bad, after all. Author Tony Edwards writes realistic fiction that teens can relate with to aid them in their quest of development toward adulthood.Edwards introduces readers to Charlie, a teenager who desperately wants to be recognized by his peers and to no longer live under his sister's shadow, something many teenagers can identify with. Interestingly, he writes not only for those who enjoy a good book but also for the many teens who do NOT like to read books. It turns out many of these reluctant young readers end up picking up the right book and not wanting to put it down This book is an excellent example of realistic science fiction. In this coming-of-age story, teens deal with time travel, something that energizes the imagination. The book features a great deal of action, comedy, and character development. Edwards, 25, was a teen himself not that long ago and can therefore easily relate to the burden of today's youth having to live in an ever-increasing digital and virtual world. For this reason, he presents food for thought as he challenges his young readers' minds. Book Two is currently in the works