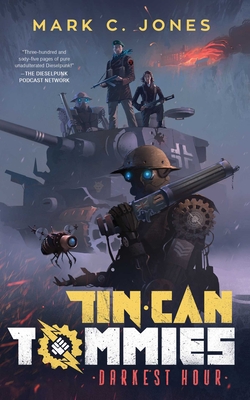 June 1940. With England on the brink of invasion, a reluctant young hero leads a team of robot commandos to take the fight back to the enemy, but with dissention in the ranks, a traitor in their midst and his nemesis hot on their heels, the odds are against them.

June 1940. After an insanely heroic rearguard action, Jack Stone and his friend, Billy Briggs, escape Dunkirk by the skin of their teeth with the remnants of the British Expeditionary Force, leaving Jack’s nemesis, General Ernst Mörder, immolated but alive. As France falls, Great Britain’s invasion appears imminent. Haunted by his brother’s death at Mörder’s hands, Jack is recruited by Winston Churchill to lead his first team of commandos. In Berlin, Adolf Hitler resurrects Mörder, an old comrade, ordering that he oversee a top-secret project in Norway. Hell-bent on revenge, Mörder is re-born, concealing his disfigurement with a grotesque crimson samurai mask. Flown to the Scottish Highlands to meet their team, Jack and Billy join Brigadier Charles Hastings and sassy American scientist, Doctor Cammy Sullivan, who introduces them to the Tin Can Tommies—four humanoid machines who fought for the Allies during the Great War—nicknamed Lancaster, Hurricane, Mosquito and Spitfire. Jack and Cammy bond as Lancaster stubbornly resists Jack’s command, and Billy starts to befriend the robots. While Jack remains unconvinced, the team slowly bond under the dutiful eye of their gritty drill instructor, Mungo McNulty, who is killed when Hastings reveals himself to be a quisling during the Tommies’ graduation celebration, handing Mörder top secret documents before committing suicide.

Distraught at McNulty’s loss, Jack spirals into depression. Introducing him to the crawlers, the team’s single caterpillar-tracked motorcycles, Cammy challenges Jack to a race across the Highlands where she persuades him that the Tommies can take the fight to the enemy. Falling for Cammy, Jack commits to lead the team who are posted to Dover for paratroop training under maverick young Spitfire ace, Alan ‘Nosy’ Parker, and his pilots of 2 Squadron, and meet Sal ‘Fixer’ Remmy, the wise-cracking pilot of their new vehicle, the Valiant, a modified Flying Fortress. After a skirmish with a German U-boat off the English coast, the team earn 2 Squadron’s respect and training begins in earnest. Jack and Cammy grow closer as the team’s first mission is revealed—the destruction of a Hydropower plant in Vemork, Norway, to prevent the creation of the world’s first atomic bomb. Mörder arrives in Vemork on a mission of his own. As the team’s bomber is destroyed mid-flight over its drop zone, they parachute into Norway but are separated above the hostile wastes. Alerted to the crash, Mörder dispatches troops to investigate. Rescued by Norwegian resistance, Jack meets their leader, Magnus Hellstrøm, and is reunited with his team, but discovers Spitfire is missing. Aware of the team’s survival, Mörder plots their location. The team take refuge at Hellstrøm’s sister’s village where Spitfire’s motionless shell has been discovered. Cammy tells Jack that her parachute was slashed, and that there may be a traitor in the group. As Lancaster, Hurricane and Mosquito pray for Spitfire’s reactivation in the village church, Mörder arrives with his troops but Hellstrøm thwarts his plans, scattering Mörder’s men across a lake of broken ice as he and the team escape with a now reactivated Spitfire. Reaching Vemork, they infiltrate the factory where Mosquito reveals he is the traitor and the team are captured.

Mörder tortures Jack and Lancaster as Mosquito loads heavy water barrels onto a train. After escaping captivity, the remainder of the team rescue Jack and Lancaster who head for the station. Hellstrøm is killed as Cammy, Billy and the Tommies blow up the factory. Commandeering a half-track, they speed alongside the train as Jack and Lancaster battle through carriages toward the heavy water barrels. Running out of road, the half-track is rescued by Remmy in the Valiant who swoops in low to pursue the train. Mosquito pins Lancaster to a carriage roof as Mörder confronts Jack. Cammy and Billy crash onto the train’s rear carriage in a tank from the Valiant’s bay and push forward. Above, the Valiant provides air support, winging a German fighter which hits a mountain creating an avalanche. The train is thrown from its tracks into an icy gorge. Perched upon a cliff edge, Cammy and Billy are lifted into the Valiant from the tank leaving Mosquito, now skewered on its cannon, to tumble to his doom. With his carriage wedged in the gorge and Lancaster half-destroyed, Jack sacrifices himself to avenge his brother, dragging Mörder to his death, but is rescued by Lancaster as Mörder plummets into the darkness. The Valiant hovers overhead and the team are re-united, vowing to continue the fight.

Weeks later in Berlin, Mörder’s daughter, Ilsa, a promising pupil at Heinrich Himmler’s SS Academy tells her Godfather, Adolf Hitler, that she has a plan to destroy Jack Stone and the Tin Can Tommies.

Mark C. Jones was born on the 3rd June 1970 in Manchester, England, and is a British author and screenwriter.

A 70’s child, Mark grew up on a diet of pulp Horror, Sci-Fi and Fantasy comics and as an aspiring artist, his fascination with the fantastic led to Mark’s first job as a special make-up/stop motion effects artist on Clive Barker’s “Nightbreed” in 1988, as well as concept design on a number of 1990’s projects including Richard Stanley’s “Hardware,” Adrian Lyne’s “Jacob’s Ladder” and “Jekyll & Hyde” with Michael Caine. Film industry work kick-started Mark’s passion for writing and he produced a number of screenplays into the mid-2000’s before deciding to switch gear to self-publishing in 2018, combining his passion for 70’s war films with his love of giant robots to create “Tin Can Tommies: Darkest Hour”—the first in a series of pulp WW2 action-adventure novels about a crack team of robot commandos.

Mark acknowledges Bram Stoker’s “Dracula” and the work of H.P. Lovecraft as early influences, and continues to enjoy the work of comic artists like Brian Bolland, Mike Mignola, and Olivier Vatine.

A sequel to the first Tin Can Tommies novel will be released in 2022 and Mark is currently at work on a new fantasy-horror series.