The Dog of Tithwal: Stories (Paperback) 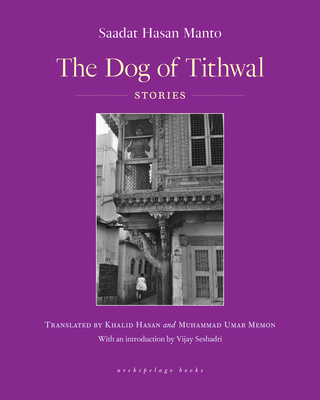 
Stories from "the undisputed master of the modern Indian short story" encircling the marginalized, forgotten lives of Bombay, set against the backdrop of the India-Pakistan Partition (Salman Rushdie)

By far the most comprehensive collection of stories by this 20th Century master available in English.

A master of the short story, Saadat Hasan Manto opens a window onto Bombay’s demimonde—its prostitutes, rickshaw drivers, artists, and strays as well probing the pain and bewilderment of the Hindus, Muslims, and Sikhs ripped apart by the India-Pakistan Partition.

Manto is best known for his dry-eyed examination of the violence, horrors, and reverberations from the Partition. From a stray dog caught in the crossfire at the fresh border of India and Pakistan, to friendly neighbors turned enemy soldiers pausing for tea together in a momentary cease fire—Manto shines incandescent light into hidden corners with an unflinching gaze, and a fierce humanism.

With a foreword by Pulitzer Prize–winning poet Vijay Seshadri, these stories are essential reading for our current moment where divisiveness is erupting into violence in so many parts of the world.

Saadat Hasan Manto wrote more than twenty collections of short stories, five radio dramas, three essay collections, one novel, and a handful of film scripts. A Muslim living in Bombay at the time of the India-Pakistan Partition, Manto was forced to migrate with his family to Lahore, where he wrote his most wrenching Partition stories. When asked why he sought to humanize the grit of Bombay and the upheaval of Partition, Manto retorted, “If you cannot bear my stories, it is because we live in unbearable times.”

Born in Kashmir, journalist, author, and translator Khalid Hasan is best remembered for his translations of the poetry of Faiz Ahmad Faiz and Saadat Hasan Manto's short fiction.

Muhammad Umar Memon was a critic, short story writer, and translator. He edited The Annual of Urdu Studies at the University of Wisconsin.

"Saadat Hasan Manto has a good claim to be considered the greatest South Asian writer of the 20th century. In his work, written in Urdu, he incarnated the exuberance, the madness, the alcoholic delirium of his time, when the country he loved cleaved into two and set upon each other"
--The New York Times

"An endlessly fertile storyteller, Manto charmed even his accusers . . . Many of his stories drench the murderous absurdities of intercommunal strife in bitter irony . . . His empathy, obliquity and narrative economy invite comparisons with Chekhov. These readable, idiomatic translations have all the agile swiftness and understated poignancy that parallel suggests."
--Boyd Tonkin, Wall Street Journal

"The Dog of Tithwal brings the streets of Bombay to life."
--Tammy Tarng, The New York Times

"Few fiction writers have captured the trauma of India’s partition as powerfully as Saadat Hasan Manto . . . Manto writes boldly yet concisely, as seen in these crisp translations, and his ability to create vivid characters is matched by a knack for building cinematic momentum . . . [a] splendid collection."
--Murali Kamma, The New York Journal of Books

"Manto, widely regarded as the foremost Urdu short story writer of the 20th century, writes tales of brutality, possession, and innocence. These translations of his work by Hasan and Memon illustrate the writer’s ability to regard everyone—crooks, the upper class, politicians, soldiers, housewives, and prostitutes—with an eye trained on humanity . . . A substantial collection from an important writer."
--Kirkus Reviews, starred review

"This sardonic collection from Manto . . . reflects the ruptures in India during the Partition . . . Throughout, the author’s clever use of irony and dark humor speaks truth to power and to the characters’ flimsy received notions. Manto’s stories succeed as surprising reflections on the human condition."
--Publishers Weekly

"In the era of the Indian independence movement and the murderous and terrifying sectarian conflicts that led to the Partition of the Subcontinent into India and Pakistan, two major figures retained their moral balance, transcended their circumstances, and illuminated their world. One was Gandhi, a politician and maybe a saint. The other was Saadat Hasan Manto, an Urdu short-story writer who was anything but a saint."
-- Vijay Seshadri, from the introduction

"Manto's irony and humanity raise him on par with Gogol."
--Anita Desai
"...visionary. A writer of special interest for anyone who cares about Pakistan, where so many forms of random-seeming violence crowd the news."
--Ali Sethi, The New Yorker

"It feels both astonishing and inspiring that such a modern writer was alive at the very birth of Pakistan."
--Sarfraz Manzoor, The Guardian

"The most extraordinary feature of Manto's writing is that, for all his feeling, he never judges. Instead, he urges us to try to understand what is going on in the minds of all his characters, the murderers as well as the murdered..."
--William Dalrymple, The New Yorker

"An errant genius."
--The Hindu

"Manto painted the women of Bombay in a way that few South Asian writers have been able to since."
--PopMatters

"I would travel anywhere with Manto. . . . He is magnificently immortal."
--Nadeem Aslam, author of Maps for Lost Lovers

"I read him 40 years ago and I meet kids who are reading Manto for the first time - you can actually see the light in their eyes. You can see their jaws dropping and they say, 'What is this? Who is this guy?'"
--Mohammed Hanif in The Guardian

"There is still no literary rival to Manto. . . . [And] as communalism, religious intolerance and enmity between India and Pakistan continue to grow, his stories are still highly relevant."
--The Independent

“Manto makes us care about all the victims, and about the killers as well as the killed – it is only by caring, by empathizing with them, that we can learn to overcome our prejudices and to sublimate our desire for revenge. Reading these stories with an open heart, we are enabled to transcend our political biases – which is perhaps the most radical stage of political development.” --Daniyal Mueenuddin

"Manto frequently expands his exploration of power to an international level, showing how the wishes and desires of individuals are crushed by the unrelenting press of history and the inner conflict induced by the need to project a religious or cultural identity. These are plainly written but powerful stories, which often lead us to uncomfortable and uncertain realisations."
--Declan O'Driscoll, The Irish Times

"Manto’s writing recalls that of Joseph Roth, whose portraits of Germany’s interwar underclass anticipated the madness to come more fully and accurately than any sociological study . . . Manto skillfully portrays what happens when people lack control over their fates, when the earth shakes and smoke rises, when life becomes easily bought and more easily discarded."
--Brian O'Neill, Necessary Fiction

"The tales in this volume are addictive, excellent portraits of a place and a time."
--Ananya Bhattacharyya, Washington Independent Review of Books

"Manto is an outlier, a freakish occurrence at a freakish time in South Asia. At the same time, this iconic enfant terrible is ageless because the world from which alcohol was for him the only escape . . . is still intact. In all his photographs, he looks absurdly boyish, his large eyes always wide open as if missing nothing, but incredulous at what he was seeing."
--Mukund Belliappa, Full Stop