Palingenesis: Book One of The Phoenix Diaries (Paperback) 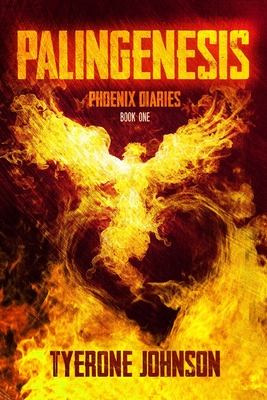 Palingenesis is about twelve-year-old Travis Turner, and follows him as he learns he's evil's chosen one, destined to bring on the end of everything.

Travis resists his destiny, and in the process awakens a power within him that he uses to fight the devil and the forces of evil.

Along for the journey is Pro, an entity who resides in Travis's mind. Pro tries to keep Travis from going to the dark side by setting him up with JJ Giovanni, a boy from school who has bullied Travis for years. As Travis's powers intensify, so does his relationship with JJ.

After Travis and JJ share an intimate moment together, JJ cracks a joke about Travis's weight. Travis teleports home and the devil whispers into his ear to go train, leading to Travis losing control of his powers, and JJ revealing that he's been stalking Travis for months before they got together.

Disgusted and angered at JJ's betrayal, Travis regains memories of how his parents allowed the govern to experiment on him as a toddler. He seeks revenge against them, but Josh intervenes, and Travis attacks him.

Before they can reconcile, soldiers form the government arrive and attack Travis; he lays wastes to them, but not before they riddle his body with bullets. Just when it seems Travis is a goner, he's called to a cave. There he learns truths about himself that forever change his life. For fans of Buffy, The X-Men, and shonen anime/manga.