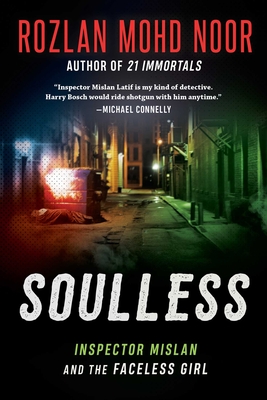 This is book number 4 in the Inspector Mislan series.

A death no one should suffer and an investigator who won’t give up—for fans of John Burdett, Ian Rankin, and Michael Connelly.

Early morning in Jalan Alor, one of the city’s red-light and tourist hotspots controlled by the Triads. A junkie’s scream of horror and the commotion that follows brings down the police, first a patrol car, and then, after what the officers see, Inspector Mislan and Detective Sergeant Johan from Special Investigations. The body in the duffle bag had been dumped in a back alley. The junkie who found the bag thought he’d hit the jackpot. The rats probably thought the same. But it was acid that took the young woman’s face and burned the flesh on her fingers, and something unknown caused the marks on her skin of what appears to be torture.

With no papers, no fingerprints, no face, and a body removed from the original crime scene, Mislan must build his case and find who committed this atrocity. The woman’s body seems to have been a message. But by whom? For whom?

This unsettling case will take Inspector Mislan and his team from Kuala Lumpur to the Land of Smiles, and from a dark alley to the dark web and a place where humans are made soulless.

Rozlan Mohd Noor served for eleven years as a crime investigator in the CID of the Royal Malaysia Police and a court prosecutor before joining the private sector. 21 Immortals, his first Inspector Mislan novel, was shortlisted for the Commonwealth Writer’s Best First Book Award and longlisted for the International DUBLIN Literary Award. He has published four more Inspector Mislan novels. He currently resides in Thailand.

"Superb . . . Fans of hard-edged crime fiction from authors such as James Ellroy and Paul Cleave will be riveted.”—Publishers Weekly, starred review

Praise for the Inspector Mislan Series
"Rozlan Mohd Noor proves that a great character can be found anywhere on the globe. Undaunted and determined, Inspector Mislan Latif is my kind of detective. Harry Bosch would ride shotgun with him any time."—Michael Connelly

"Impressive . . . The combination of clever plotting and portrayal of life in Malaysia is a winner. Noor brilliantly integrates an unusual impossible crime into a gritty procedural story line."—Publishers Weekly, starred review of DUKE: Inspector Mislan and the Expressway Murders

“Written in terse prose with to-the-point dialogue, little gets in the way of Noor’s narrative momentum and he tears through the story’s investigation with a nimble touch.”—LA Review of Books on 21 Immortals: Inspector Mislan and the Yee Sang Murders

“Razor-sharp and full of the grit and color of the streets of Kuala Lumpur, 21 Immortals is a gripping examination of the link between organized crime and politics. Total edge-of-the-seat stuff."—Tash Aw, award-winning author of The Harmony Silk Factory and We, the Survivors

“Mislan’s investigations will transport American readers to a distant city made familiar by human connections and misdeeds. A timely, nuanced portrayal of LGBTQ+ issues, Noor's latest is highly recommended for fans of John Burdett’s Sonchai Jitpleecheep procedurals.”—Booklist (on UTube)

“Has all the makings of a classic detective novel—a tough, engaging detective, a story that grips from the first page, and an ending that is just as intriguing and satisfying as you hoped it would be. Highly recommended.”—W. C. Ryan, author of A House of Ghosts

“From a macabre murder scene to an unexpected ending . . . nothing is predictable in this atmospheric story set in exotic Malaysia.” —Timothy Jay Smith, author of Fire on the Island and The Fourth Courier

“The pleasure in 21 Immortals arises from the fact the writer enjoys the storytelling. He is having fun, and it spills into the novel. He loves his hero. The unpretentious Inspector Mislan, who doesn’t ‘wear shades, or talk standing sideways,' is more likable than the lead in CSI Miami.”—SH Lim, Time Out Kuala Lumpur

"A compelling and nefarious crime with corruption at its heart. Inspector Mislan is a fierce adversary."—Lauren A. Forry, author of They Did Bad Things

"Stellar . . . Fans of honest cops working in a rigged system are in for a treat."—Publishers Weekly, starred review of 21 Immortals

"Rozian Mohd Noor tells the harrowing tale of a tough cop on the streets of Kuala Lumpur who attempts to solve the grotesque murder of an entire family. The suspense winds tighter with each new twist. Inspector Mislan, Noor’s all-too-human hero, is the perfect cop to solve this perfect crime."—Bart Paul, author of the Tommy Smith High Country Noir series

"As approachable as it is brilliant, 21 Immortals could and should become a classic of detective fiction. I like to think of Inspector Mislan Latif as Malaysia's Montalbano, not just for the love of food, coffee, and cigarettes, but for the wit, resolve, and humanity."—Davide Cazzaro, publisher of Nang magazine

“Noor, himself a veteran of the Malaysian police force, makes the plot twists plausible and his characters true to life. This gritty series merits a long run.”—Publishers Weekly, starred review on UTube)

"Rozlan Mohd Noor has written another excellent police procedural, enjoyable both for the mechanics of the investigation (forensics, leg work, computer savvy – and a bit of luck) and for its detailed background in Kuala Lumpur.  And, of course, for its food. It seems there is always food. . . . All-in-all, UTube is a quick and fun read."—Mostly Mysteries (on UTube)