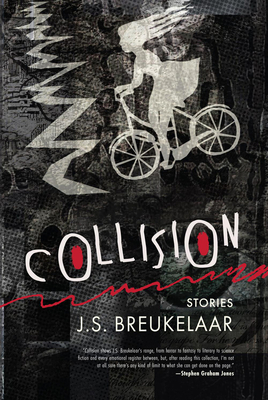 A collection of twelve of J.S. Breukelaar's darkest, finest stories with four new works, including the uncanny new novella "Ripples on a Blank Shore." Introduction by award-winning author, Angela Slatter. Relish the Gothic strangeness of "Union Falls," the alien horror of "Rogues Bay 3013," the heartbreaking dystopia of "Glow," the weird mythos of "Ava Rune," and others. This collection from the author of American Monster and the internationally acclaimed and Aurealis Award finalist, Aletheia, announces a new and powerful voice in fantastical fiction.

J.S. Breukelaar is the author of the Aurealis-nominated novel Aletheia, and American Monster, a Wonderland Award finalist. She has published stories, poems and essays in publications such as Gamut, Black Static, Unnerving, Lightspeed, Lamplight and elsewhere. She is a columnist and regular instructor at LitReactor.com. California-born and New York raised, she currently lives in Sydney, Australia with her family. You can find her at www.thelivingsuitcase.com.

"(4 stars) Collision transcends the borders of horror writing by creating fantastical and near real-life world with simple twists that keep them tangible but still impossible to predict." — Rachel Gonzalez, Paperback Paris

"Breukelaar’s delectable prose draws in the reader, and I frequently found myself in that perfect hypnotic state where I forgot I was reading—the highest honour one can bestow on an author, in my opinion." — Kris Ashton, Andromeda Spaceways Magazine

"Collision: Stories, should be on your ‘‘must read’’ list. Breukelaar... writes in a clean, incisive style with razor-sharp opening hooks, while blending the literary, the speculative, and the weird." — Paula Guran, Locus Magazine

"There’s an ethereal and dreamlike quality to Breukelaar’s prose that demands attention and reflection that keep the reader enthralled beyond the last page." — Aimée Lindorff, Aurealis Magazine

"J. S. Breukelaar is a writer of obvious talent, demonstrated over and over in this collection." — New York Journal of Books

"All 12 stories hit the same surreal nerve despite their sometimes vastly different plots, making the transition from one story to another feel like entering an entirely new world. The only predictable element is the collection's overall strangeness, which is something that never gets old." — Booklist

"The stories are ruthless, nothing is safe—even the child who offers a lollipop and loses a wrist to the Clint Eastwood dog. Breukelaar experiments with the Gothic and queries the queer. Bedded within the tales is a voluptuous energy that turns pages. Tables pirouette in a blink and, before you know it, the story is eleven shades grimmer." — Eugen Bacon, Breach Magazine

"I immediately felt captivated by J.S. Breukelaar’s evocatively descriptive style, her convincing observations of human behavior and the incisive quality of her dialogue. At times it felt as though her characters, and the worlds they inhabited, were leaping off the page, demanding my full attention. Although each of the stories is very different, what remains constant throughout the collection is the author’s skill in drawing her readers into the fantastical worlds she is describing. Yet these are worlds which, albeit in slightly distorted ways, are often all too easily recognizable, possibly because there is always an element of people struggling to make sense of, and adjust to, the world they are inhabiting." — Linda Hepworth, NB Magazine

"Breukelaar tackles rejection and misunderstanding head-on by harnessing her wonderfully weird prose and creating an imaginarium from it, one that holds things you’ve never dreamt could – or should – exist." — Fangoria Magazine

"Each of these stories stylishly investigates an encounter between characters and forces of otherworldly, or in some cases off-world, hues. But Breukelaar accomplishes much more than that. She delves into how such contacts--which range from the merely glancing to the traumatically concussive--lead to altered perspectives and transformations of the mind, a literary feat of the first order." — Orson Scott Card's Intergalactic Medicine Show