The Girl with No Face: The Daoshi Chronicles, Book Two (Mass Market) 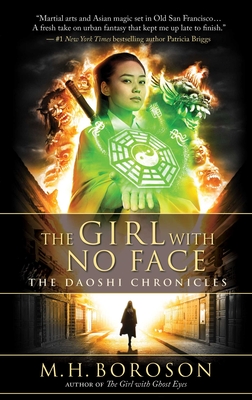 This is book number 2 in the The Daoshi Chronicles series.

The adventures of Li-lin, a Daoist priestess with the unique ability to see the spirit world, continue in the thrilling follow-up to the critically-acclaimed historical urban fantasy The Girl with Ghost Eyes.

It’s the end of the Nineteenth Century. San Francisco’s cobblestone streets are haunted, but Chinatown has an unlikely protector in a young Daoist priestess named Li-lin. Using only her martial arts training, spiritual magic, a sword made from peachwood, and the walking, talking spirit of a human eye, Li-lin stands alone to defend her immigrant community from supernatural threats.

But when the body of a young girl is brought to the deadhouse Li-lin oversees for a local group of gangsters, she faces her most bewildering—and potentially dangerous—assignment yet. The nine-year-old has died from suffocation . . . specifically by flowers growing out of her nose and mouth. Li-lin suspects Gong Tau, a dirty and primitive form of dark magic. But who is behind the spell, and why, will take her on a perilous journey deep into a dangerous world of ghosts and spirits.

With hard historical realism and meticulously researched depictions of Chinese monsters and magic that have never been written about in the English language, The Girl with No Face draws from the action-packed cinema of Hong Kong to create a compelling and unforgettable tale of historical fantasy and Chinese lore.

M. H. Boroson was obsessed with two things as a young man: Buffy the Vampire Slayer and kung fu movies. He has studied Chinese religion at Naropa University and the University of Colorado and now lives in Denver, Colorado, with his wife and three cats. The Girl with No Face is his second novel, following The Girl with Ghost Eyes.

Praise for The Girl with No Face

"Brings Chinese folklore vibrantly to life. . . . Boroson endows Li-lin with courage and quick wit along with her magical and martial skills. . . . The imagery can be breathtaking. Readers will be delighted that this exhilarating chronicle ends with the promise of more adventures in store for Li-lin and her allies."—Publishers Weekly

"The unique world-building that Boroson had built [in The Girl with Ghost Eyes] has always stayed fresh in my mind; it was fascinating how one book could encapsulate what it might feel like to live during that era while also introducing incredible elements of fantasy, horror, action, spirituality, religion, deep character growth, and sheer wonder. The Girl with No Face improves upon this in every sense: the relationships grow more complex, the action scenes are more gratifying, the mysteries are fascinating, and the tragedies cut even deeper. I cannot recall a book that has taken me out of my own head and pulled me this deep into its lore." —Fantasy Book Review, 9.2 out of 10

“Fans of urban fantasy, Chinese martial arts, magic, and elements of the supernatural will enjoy this second series installment, which captivates readers from the opening pages. . . . A true page-turner not to be missed.”—Library Journal, starred review

“Magical imagery, sparkling and downright funny dialog, complex characters and an immensely satisfying plot, all framed by the rich history of Chinese immigrants in 1899 San Francisco. This story was a delight from start to finish. . . . Boroson’s world is endlessly fascinating, and I am actually very sad that I’ve finished this book.”—Books, Bones, and Buffy

"An absolutely brilliant sequel to The Girl with Ghost Eyes. . . . My expectations were incredibly high going into this sequel, but I shouldn't have worried because this novel was just about everything I could have wanted. Historical fantasy is one of my favorite genres and Boroson writes some of the best. His Daoshi Chronicles deserves all of the love and attention it can get. The author's characters are all so fantastic, but Li-lin is still one of the best leading ladies I've had the opportunity to get to know. . . .I'm dying to revisit this world in the future and I can't wait to read anything Boroson decides to write."—Never Anyone Else

“Li-lin is such a fantastic character.  She can be beset by guilt and loss and self-doubt.  But her tenacity, intelligence, loyalty, bravery, and spunk make her one of the best characters I have read about. . . .The world needs more fantasy like these books.”—The Captain’s Quarters

“This was a follow up to The Girl with Ghost Eyes, a book that I absolutely adored and had long been anticipating its sequel. Happy to say that the sequel more than lives up to the first and, I think, even surpasses it in some ways. There are really some amazing things about this one.”—Way Too Fantasy, September 2019 Favorite Books of the Month

"This was a very unique title with a great story.  This book is teeming with well written characters and one amazing story.  The world building jumps off the page and just everything comes together. That I need a print copy of this one ASAP! Don't let this one pass you by!"—Crossroad Reviews

“A worthy follow-up to The Girl with Ghost Eyes and a wonderful adventure on its own terms.”—Geekly, Inc.

“I strongly recommend this novel for fans of historical fantasy who are looking for something from a non-Western European tradition. Even if that’s not what you’re looking for, I would still recommend this book because it’s an absolute hell of a read.”—A Bookish Type

Praise for The Girl with Ghost Eyes

“The Girl with Ghost Eyes is a fun, fun read. Martial arts and Asian magic set in Old San Francisco make for a fresh take on urban fantasy, a wonderful story that kept me up late to finish.”
—#1 New York Times bestselling author Patricia Briggs

“A brilliant tale of magic, monsters, and kung fu in the San Francisco Chinatown of 1898” —Publishers Weekly, starred review

“Boroson’s writing is both lyrical and captivating . . . This is a thrilling adventure through historical Chinatown, and an exquisite blend of history and myth set in a spirit-world you’ll never forget.” —Rob Thurman, New York Times bestselling author

“An impressive first novel set in a beautifully realized world of Daoism and martial arts . . . One of those books you can’t wait to get back to.” —Lian Hearn, author of the international bestselling Tales of the Otori series

"A brilliant tale of magic, monsters, and kung fu in the San Francisco Chinatown of 1898 . . . smoothly mixes Hong Kong cinema with urban fantasy, and Li-lin is a splendid protagonist whose cleverness and bravura will leave readers eager for her future adventures."
—Publishers Weekly, starred review

"Packed with evocative imagery of the multitudes of spirits lurking just out of sight. Li-lin is a strong, determined character, but Boroson doesn’t make her wildly anachronistic for her time, imbuing her with filial loyalty and a respect for her culture that should not be called meekness."
—Library Journal, starred review

"A thrilling world of kung fu, sorcery and spirits. . .The pace never slows, offering a constant stream of strange characters, dire threats, and heroic actions that makes the book a compelling page-turner."
—The A.V. Club

“A must-read for fans of historical fantasy and Chinese lore. The Girl with Ghost Eyes delivers a compelling heroine torn between talent and tradition in a fascinating Chinatown full of monsters, magic, and kung fu.” —Betsy Dornbusch, author of Exile and Enemy

"Li-lin is one of my all-time favorite female characters after reading this book; I simply fell in love with her ... I expect to see The Girl with Ghost Eyes on lots of “Best of” lists this year. It’s certainly going to be on mine. Highly recommended."
—The Speculative Herald, 10/10 rating

"Masterful writing ... Boroson has has done his research quite extensively, and he’s approached every aspect of the book with thoughtfulness and respect ... I am absolutely ravenous for more of Li-Lin’s story."
—Christina Ladd, Geekly Inc.