Ours to Hack and to Own: The Rise of Platform Cooperativism, a New Vision for the Future of Work and a Fairer Internet (Paperback) 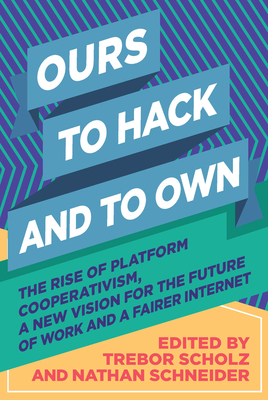 A Wired Magazine Top Tech Book of 2017 Real democracy and the Internet are not mutually exclusive. Here, for the first time in one volume, are some of the most cogent thinkers and doers on the subject of the cooptation of the Internet, and how we can resist and reverse the process. The activists who have put together Ours to Hack and to Own argue for a new kind of online economy: platform cooperativism, which combines the rich heritage of cooperatives with the promise of 21st-century technologies, free from monopoly, exploitation, and surveillance. The on-demand economy is reversing the rights and protections workers fought for centuries to win. Ordinary Internet users, meanwhile, retain little control over their personal data. While promising to be the great equalizers, online platforms have often exacerbated social inequalities. Can the Internet be owned and governed differently? What if Uber drivers set up their own platform, or if a city's residents controlled their own version of Airbnb? This book shows that another kind of Internet is possible--and that, in a new generation of online platforms, it is already taking shape.

Trebor Scholz, scholar-activist, is Associate Professor for Culture & Media at The New School in NYC, where he convenes the Digital Labor conference series. Among other books, he is the author of the forthcoming Uber-Worked and Underpaid: How Workers Are Taking Back the Digital Economy (Polity Press)