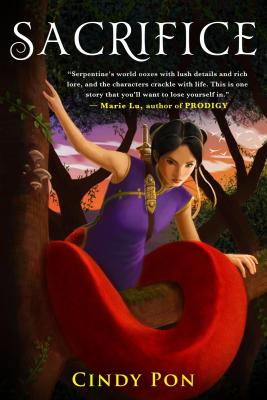 By Cindy Pon
Unavailable to Order
Out of Print

Skybright is plunged into the terrifying Underworld where demons are bred, while Stone, stripped of his immortal status, must find a way to close hell's breach before more mortals die. Meanwhile, Zhen Ni, Skybright's former mistress and friend, is now wed to the strange and brutish Master Bei, and she finds herself trapped inside an opulent but empty manor. When she discovers half-eaten corpses beneath the estate, Zhen Ni worries that Master Bei is not all he seems. As Skybright begins the dangerous work of freeing Zhen Ni with the aid of Kai Sen and Stone, nothing can prepare them for an encounter so dark that it threatens to overtake their very beings.

Cindy Pon is a writer and a longtime student of Chinese brush painting. She is the author of Fury and the Phoenix, Serpentine, and Silver Phoenix, which was named one of Booklist’s Top Ten Fantasy and Science Fiction Books for Youth, and one of 2009's best Fantasy, Science Fiction and Horror by VOYA. She lives in Southern California.

"Serpentine's world oozes with lush details and rich lore, and the characters crackle with life. This is one story that you'll want to lose yourself in."  —Marie Lu, author, Prodigy, on Serpentine

"This fast-paced fantasy adventure is set in an ancient China of folklore, the same land as Pon’s previous books . . . At its core, the novel is about friendship, loyalty, and self-acceptance, with characters as delightfully real as any in the realm of young adult literature." —Diane Colson, VOYA Magazine on Serpentine