What the Confederate Flag Means to Me: Americans Speak Out in Defense of Southern Honor, Heritage, and History (Paperback) 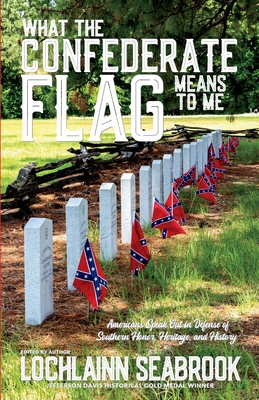 The Confederate Battle Flag is not "controversial" and it has absolutely nothing to do with racism, hate, slavery, or treason. Why then does it engender negative reactions from some people? More importantly, what is the true meaning of what we Southerners affectionately call the "Southern Cross"? What do the symbols and colors on the flag actually represent? Why is the Confederate flag closely associated with Conservatism and why do traditional Southerners vow to forever fly it over their homes and businesses?

In this generously color-illustrated compendium entitled What The Confederate Flag Means to Me, award-winning Southern historian Lochlainn Seabrook answers these questions (and more) in a diverse collection of comments from dozens of Americans from all walks of life and regions. The statements made by these enlightened men and women completely overturn the Left's fake history surrounding the flag, finally revealing the Truth - one that Liberals have been suppressing for the past 160 years, but which is vital to a true understanding of early American history and modern politics.

For the serious Civil War buff, scholar, and historian, this essential little volume includes footnotes, an index, an informative introduction, and an educational section on how you can help save the traditional South. Read What the Confederate Flag Means to Me and find out why the Southern Cross is loved and flown by hundreds of millions of people, not only in the U.S., but around the world. This is the only book of its kind Available in paperback and hardcover. (All text copyright (c) Sea Raven Press)

Lochlainn Seabrook is the author and editor of over 70 books, including: Abraham Lincoln Was a Liberal, Jefferson Davis Was a Conservative; Lincoln's War: The Real Cause, the Real Winner, the Real Loser; The Unholy Crusade: Lincoln's Legacy of Destruction in the American South; The Great Yankee Coverup: What the North Doesn't Want You to Know About Lincoln's War; Confederacy 101: Amazing Facts You Never Knew About America's Oldest Political Tradition; Confederate Flag Facts: What Every American Should Know About Dixie's Southern Cross; Women in Gray: A Tribute to the Ladies Who Supported the Southern Confederacy; Everything You Were Taught About American Slavery is Wrong, Ask a Southerner ; Honest Jeff and Dishonest Abe: A Southern Children's Guide to the Civil War; The Constitution of the Confederate States of America Explained; and A Rebel Born: A Defense of Nathan Bedford Forrest.