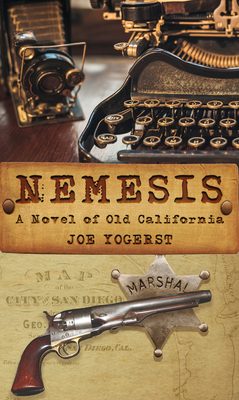 Forget Deadwood, Dodge, and Tombstone, the biggest, baddest boomtown of the 1880s was San Diego, California. The attraction wasn’t gold or silver but cheap land, the promise of an oceanfront paradise where it never snows and rarely rains, and the too-good-to-be-true deals offered by local real estate merchants. In the wake of bona fide settlers came the hucksters, con artists, and snake oil vendors—so many flimflam men (and women) that those duped called the town “Scam Diego.” Abetting the crime and chaos was the nearby Mexican border, a convenient refuge for the rustlers, ex-Rebels, and banditos who floated back and forth across the unmarked frontier.

Caught up in this perfect storm are two men: U.S. Marshal Cradoc Bradshaw and San Diego Times reporter Nicholas Pinder. Best friends growing up, Bradshaw and Pinder are now sworn enemies—all because of a woman. Having once cooperated to catch bad guys, Bradshaw and Pinder now compete—Pinder with his quill pen or Bradshaw with his sawed-off shotgun and Colt single action Army revolver. The competition heats up when someone starts killing the town’s movers and shakers. As the bodies pile up, the question becomes which of the former friends will track down the killer first?

“Land of Nine Dragons” – about his journey through Vietnam – was named America’s Best Travel Book in the Lowell Thomas Awards competition. “The Long Road South” about his four-month journey along the Pan American Highway between Texas and Argentina was named one of America’s top two travel books by the Society of American Travel Writers. His latest National Geographic book – “50 States, 5,000 Ideas” – soared to No. 1 at Amazon Travel Books.

As a staff writer at MTM and Stephen J. Cannell Productions, he developed television movies and wrote episodes of TV shows like “Two” and the long-running “Silk Stalkings” murder-mystery series. He has an ongoing relationship with Craig Anderson Production in Hollywood and Creative Street Entertainment in Indianapolis, developing action adventures and sci-fi series and reality shows for network and cable TV.