Media Circus: A Look at Private Tragedy in the Public Eye (Hardcover) 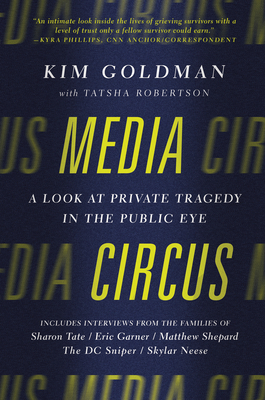 Imagine losing a loved one in the public eye.

A media frenzy ensues and spreads your family name through the news. Reporters ambush you, and across the country, strangers gossip about your personal loss.

Welcome to the circus.

No one understands better than Kim Goldman the complex emotions of individuals suffering a personal tragedy under the relentless gaze of the media. During the famed O.J. Simpson trial, Kim, whose brother, Ron Goldman, was brutally murdered, became the public poster child for victims suffering in the public eye.

In Media Circus, Goldman, now a dedicated victims' advocate who works with families across the country, presents the first collective look at these ordinary, grieving victims—forced to manage their very private trauma and despair in a very public way.

Through candid interviews and detailed, original reporting, Media Circus delivers riveting, humanizing, and inspiring stories from the victims and survivors of violent crimes who found themselves the focus of national media attention. Its heartfelt narratives showcase the unique challenges of coping with and healing from grief when the whole world is watching.

Media Circus goes beyond the names and faces to show the real victims behind the stories.

Known nationwide as a victims’ rights advocate after her brother’s murder and the infamous OJ Simpson murder trial, Kim Goldman is the founding Co-Chair of The Ron Goldman Foundation for Justice. She is also the Executive Director of The Youth Project, a non-profit organization that provides free counseling, support groups, crisis intervention, and education and outreach to thousands of teenagers since opening in 2000. In her spare time, Goldman travels the country as an impassioned public speaker on victims’ rights, the role of the media, judicial reform, and other related topics. She is currently a resident of Greater Los Angeles, where she has lived for thirteen years, and a single parent. See more online at KimberlyGoldman.com.

Former magazine editor Tatsha Robertson is an award-winning editor and writer with more than twenty years of experience handling investigative, feature, and news stories for leading magazines and newspapers. As the first female NYC Bureau Chief and National Rover for The Boston Globe, she covered some of the nation’s largest stories, including Katrina, September 11th, and many major crime stories. She pioneered Essence magazine’s focus on investigative and news articles, which led to the positioning of the magazine as a significant authority and voice on news and led to an interview with President Obama. Most recently, she was the crime editor at People Magazine. Robertson is a frequent guest on national media, appearing on programs like The Today Show, CNN, HLN, FOX, and MSNBC. Tatsha teaches journalism as an adjunct professor at NYU. She is currently partnered with Harvard University’s Achievement Gap Initiative in coauthoring a book on academic achievement.

“Kim takes us to a place the camera rarely has an opportunity to go. An intimate look inside the lives of grieving survivors with a level of trust only a fellow survivor could earn. At times of tragedy, mass media tends to skim the surface.”

“Behind every headline lies a personal story that is often forgotten or never told. Kim Goldman's Media Circus renders an eye-opening glance into the reality of high-profile victims’ personal loss and struggle for healing.”

“Goldman makes very important comparisons of cases from the past 30 years and shows how social media and media in general has impacted the victims while living under the public microscope.”