The Odds: A Post-Apocalyptic Action-Comedy (Paperback) 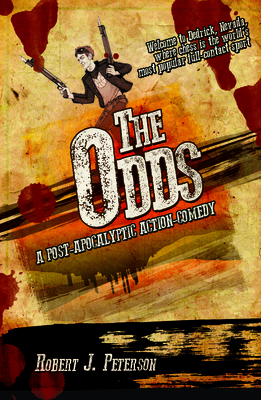 The apocalypse happened, but no one knows how. What's left is a barren world ruled by a high-powered caste of bookies, The Odds. Scurrying around underneath is our hero, Eldridge--a big-hearted, bumbling drifter with an estranged family he loves dearly. He's deep in debt and deathly sick, so he places a bet predicting the day he'll die. If he wins, he can go to his grave knowing that his family will be safe, but when he returns to his hometown to collect, he gets some bad news: He's going to live. So it's on to plan B--a high-stakes battle-tournament that pits real-life chess avatars against each other in random-chance brawls-to-the-death. But Eldridge doesn't know that someone's gamed the tournament to pit him against an old friend who's now a bitter enemy. Now he's got to make all the right moves to save his family--and beat the Odds.

Robert J. Peterson is writer and web developer living in Los Angeles. A Tennessee native, he graduated from Northwestern University's Medill School of Journalism. He's written for newspapers and websites all over the country, including the Marin Independent Journal, PerformInk, Space.com, the Telluride Daily Planet, and Geekscape.net. In 2004 he co-founded the pop-culture emporium CC2KOnline.com. He's appeared on the web talk shows Comics on Comics, The Fanboy Scoop, Geekscape and Fandom Planet. He's the founder of California Coldblood Books and a co-host for the Star Trek podcast Make It So.His friends call him Bob.