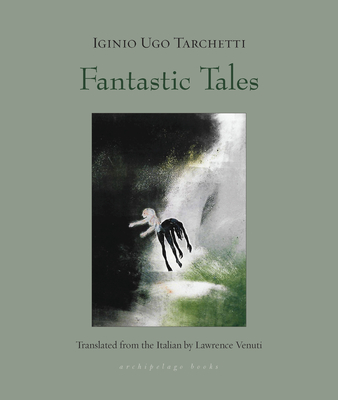 Lawrence Venuti, winner of a Guggenheim fellowship and the Global Humanities Translation Prize, among many other awards, has translated into English these Italian Gothic tales of obsessive love, mysterious phobias, and the hellish curse of everlasting life.

In this collection of nine eerie stories, Iginio Ugo Tarchetti switches effortlessly between the macabre and the breezily comical. Set in nineteenth-century Italy, his characters court spirits and blend in with the undead: passionate romances filled with jealousy and devotion are fueled by magic elixirs. Time becomes fluid as characters travel between centuries, chasing affairs that never quite prosper. First published by Mercury House in 1992.

Iginio Ugo Tarchetti was born in San Salvatore Monferrato in Piemonte, in 1839. After his military life was cut short due to illness (or for writing an antimilitarist novel, depending on who's telling the story), he moved to Milan and became involved with the 'scapigliatura', literally meaning 'dishevelled', an artistic movement that rebelled against traditional values and the Italian artistic and literary canon at that time. He published articles in several newspapers. Considered the first Italian writer to experiment with the Gothic style, Tarchetti is often compared to Edgar Allan Poe. He died at the age of 29 from tuberculosis.

"Tarchetti’s project was not only to entertain, but to challenge and subvert. He is at his best when musing on such philosophical matters as time, beauty, morality and truth. His writing blurs the line between life and death, good and evil, beauty and ugliness, male and female . . . Thanks to [Lawrence] Venuti, and this reprint of his excellent edition from 1992, the first and only English translation of Fantastic Tales, he is brought to our attention once more." -- Esmé O'Keeffee, Times Literary Supplement

"If Poe had set out to write Villiers de l'Isle Adam's Cruel Tales, the result might be Tarchetti.  Beautifully translated by Lawrence Venuti, these capture Tarchetti's unique and peculiar flavor: his deep Romanticism, his belief in the obsessiveness of desire, and his fascination with the supernatural." -- Brian Evenson, author of Dead Space: Martyr and Song for the Unraveling of the World

"Tarchetti's beguiling fantasies are triumphs of imagination as well as masterfully told stories. Tarchetti writes with comic bravura and surrealist invention that makes him a cousin, at least, of Kafka and Isak Dinesen." - Guy Davenport

"Tarchetti was pretty much the sole practitioner of the Gothic tale in his own language. Until his death in 1869 at the age of 29, he poured out a stream of freakish and fervid stories that made him moderately famous -- and definitively minor. Does I. U. Tarchetti deserve better? Judging from Lawrence Venuti's elegantly translated collection, "Fantastic Tales," the answer is yes." -James Marcus, The New York Times Book Review

"In Lawrence Venuti’s brilliant new translation of nine stories by cult Gothic storyteller Tarchetti, readers will find themselves confronted by the astounding, the uncanny, and the downright disturbing, immersed in the eerie and the macabre, and elbowed in the side by the comical." — CrimeReads

"Tarchetti occupies a singular place in Italian literature as an antecedent of the great innovators of this century, including Calvino and Pirandello ... Tarchetti imported his stories from abroad, rewriting works by Mary Shelley, the Alsatian collaborators Emile Erckmann and Louis-Alexandre Chatrian, and Theophile Gautier. While the stories are marvelous in and of themselves, in Venuti's thoughtful presentation they serve as entree into an equally strange and marvelous literary phenomenon." -Publishers Weekly

"Tarchetti, who also worked as a translator, was heavily influenced by gothic literature from abroad, favoring the morbid, the metaphysical, the socially and sexually outré . . . remarkably vivid and innovative . . . A collection of nine classic macabre tales, exquisitely translated from the Italian by Venuti." -- Kirkus

"While current Italian literature in English translation is closely followed by publishers, critics, and readers, the Italian writers of the past...are largely ignored. Lawrence Venuti now presents the nineteenth-century writer Iginio Ugo Tarchetti--a strange, romantic figure now almost forgotten even by Italian readers...Tarchetti is emblematic, the child of his times and their taste. These stories are enjoyable to read simply for themselves, but they also illustrate a literary culture of notable fascination. The translations flow, yet retain the flavor of their period and are true to the style and personality of their curious, gifted author." --William Weaver


"[Tarchetti] strived and succeeded in creating his own style which, on the one hand, anticipated elements of the great naturalistic novel by Zola and Verga while, on the other hand, pushed the boundaries of expressivity in an experimental direction." --Enrica Maria Ferrara and Stiliana Milkova, Reading in Translation