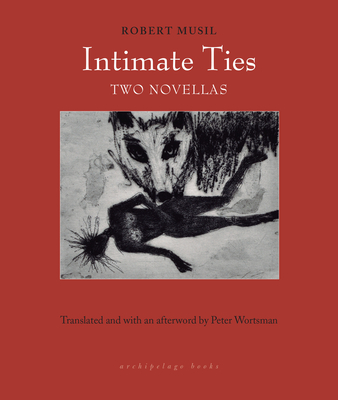 First published in 1911, Intimate Ties is Robert Musil’s second book, consisting of two novellas, “The Culmination of Love” and “The Temptation of Silent Veronica”. Each revolves around a troubled woman in the throes of her sexual and romantic woes, as their memories of the past return to influence their present desires. Musil tracks the psyche of his protagonists in a blurring of impressions that is reflected in his experimental prose.

Intimate Ties offers the reader an early glimpse of the high modernist style Musil would perfect in his magnum opus The Man Without Qualities.

Robert Musil (1880-1942), born in Vienna, was trained as a mathematician, behavioral psychologist, engineer, and philosopher. During World War I, he served as an officer in the Austrian Army on the Italian front. He died exiled and impoverished in Switzerland in 1942. Author of The Man Without Qualities, The Confusions of Young Törless, and Five Women, Musil is one of the towering pillars of high modernism.

Peter Wortsman is the author of A Modern Way to Die: Small Stories and Microtales, the plays The Tattooed Man Tells All and Burning Woods, the memoir Ghost Dance in Berlin, and a collection of short fiction, Footprints in Wet Cement. Wortsman's translations from the German include Telegrams of the Soul: Selected Prose of Peter Altenberg, Travel Pictures by Heinrich Heine, Posthumous Papers of a Living Author by Robert Musil, The Man Who Sold His Shadow by Adelbert von Chamisso, Selected Prose of Heinrich von Kleist, Selected Tales of the Brothers Grimm,Tales of the German Imagination: From The Brothers Grimm to Ingeborg Bachmann, and Konundrum: Selected Prose of Franz Kafka.

“[These stories] mimic the circular thought patterns of private obsession with such authenticity that they could easily frighten readers . . . each novella scrutinizes the inchoate nature of the human psyche with great audacity and compassion, and each functions as a resolute exploration of the limitations of self-expression through language.”
—The Hudson Review

“Funny, sad and true—or rather funny because they are both sad and true—such observations are, to use a typical Musil phrase, a form of ‘daylight mysticism,’ shafts of light in a darkening world.”
—Chicago Tribune

Praise for Peter Wortsman’s translation of Konundrum by Franz Kafka: