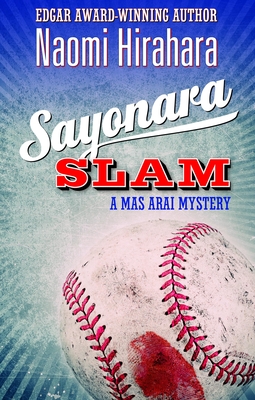 This is book number 6 in the Mas Arai Mystery series.

"Hirahara has a keen eye for the telling detail and an assured sense of character."
--Los Angeles Times
At Dodger Stadium it's Japan vs. Korea in the World Baseball Classic, but before the first pitch is thrown, Mas Arai finds himself in the middle of a murder. Mysteries layer atop mysteries in this sixth in the award-winning series featuring the most unlikely of sleuths, an aging, widowed, not-exactly-communicative gardener from Altadena, California. Who is that unusual woman throwing knuckleball pitches to warm up the Japanese team? Who sent thugs to threaten Mas and accuse him of treason? And what were in the deleted files on the murdered sportswriter's computer--and did they hold secrets that led to his death? The more mysteries Mas uncovers, the deeper he gets drawn into a situation that soon grows dangerous--including the danger of losing the affection of the woman he might someday admit he loves. "What makes this series unique is its flawed and honorable protagonist. . . . A fascinating insight into a complex and admirable man."
--Booklist (starred review)

Naomi Hirahara is the Edgar Award-winning and Anthony and Macavity Award-nominated author of the Mas Arai mystery series, including Strawberry Yellow, Blood Hina, and Snakeskin Shamisen. She is also the author of the new series of L.A.-based Ellie Rush mysteries, published by Penguin. Her Mas Arai books have earned such honors as the Chicago Tribune's Ten Best Mysteries and Thrillers and Publishers Weekly Best Book of the Year. The Stanford University alumna was born and raised in Altadena, CA, where her protagonist lives; she now resides in the adjacent town of Pasadena, CA.