The Rabbit and the Raven: Book Two in the Solas Beir Trilogy (Hardcover) 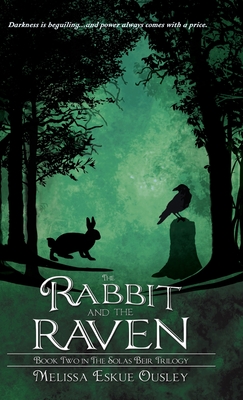 Adopted and raised by loving parents, David Corbin had no idea his life as he knew it was a lie. Then he met a girl. Abby Brown freed David from the spell keeping him from the truth, that he was the lost heir to the throne in a magical realm. After escaping the clutches of the woman who kidnapped him, fleeing an army of blood-thirsty monsters, and winning Abby's heart, David returned to claim his crown as Solas Beir, king of Cai Terenmare. Even though he got the girl and gained a kingdom, David had no clue about the unfathomable power he would inherit, nor did he realize how much he would have to sacrifice to keep the throne. Tynan Tierney, the man who ordered the assassination of David's father, has been freed from his wasteland prison by Lucia, the very woman who abducted David. Together, they plot to usurp the new king, once again gathering Tierney's dark disciples. If there is any hope of winning the war against his Kruorumbrae, the deadly Blood Shadows, David, Abby, and their friends will have to journey to the outer edges of the realm to secure the loyalty of the four Oracles. Their quest leads them to new knowledge about the evil lord's origins and the character of those who are loyal to him. Along the way, Abby makes her own discoveries as she uncovers her powerful abilities as a seer and learns that the lines between good and evil are sometimes blurred. Being seduced by darkness may be far easier than she ever imagined.