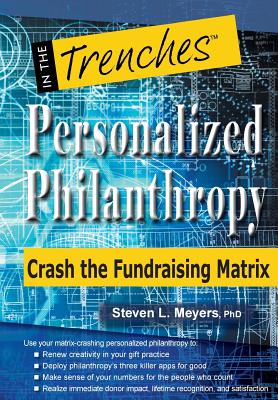 Personalized philanthropy is a radical new approach to what we traditionally called planned giving. After decades of "it's all-about-our-organization fundraising," charities thought it wise to take into account what donors might need from the gift transaction. For a long time, this meant little more than applying planned giving techniques, many of which provide payments or an income to the donor in exchange for giving up an asset. More recently, and a bit more expansively, the question has grown to include what donors need, not only from a financial perspective, but from a mission perspective-the donor's mission, not just the charity's.

But while that's the better idea, until now it's been pretty much only an idea. The words donor-focused philanthropy sound nice, but there hasn't been much to concretely define them or put them to some strategic use.

Steven Meyers has finally broken through the linguistic and strategic logjam to make sense of connecting donor and charities in a way that will, and already does at some organizations, change the way money is raised. It's not just a new twist to take into account a roller-coaster economy and it's not just a new gimmick to address what has come to be known as the great generational wealth transfer. Using a metaphor of an imprisoning Matrix-the typical development office with its goals and deadlines-Steve artfully and persuasively works through and explains three concepts: virtual endowments, philanthropic equity gifts, and step-up gifts. Each captures what's wrong with the current fundraising model and provides a basis for improving it.

This is not to say that fundraisers today are doing a poor job. Quite the contrary: those who work at charities are doing yeoman's work to make their organizations better as they pursue their missions. But it is also true that development offices can be bureaucratic and, because of inherent limitations, much more could be done. In fact, as donor-focused philanthropy has been a personal cause of mine for many years, I have seen how many organizations limit their ability to raise funds simply because they are not fully engaged with the donor's needs or desires. But to be engaged, fundraisers need to ask a whole different set of questions. Steve guides us through those questions and helps us make meaning of the responses we are likely to get from donors. Doing that, of course, will enhance donors' appreciation for the work charities do and, yes, increase their support.

In this book Steven covers:

Chapter One
The Two Cultures of Fundraising: Preparing to Crash Your Fundraising Matrix

Chapter Six
Being the Change and Making your Own Shift