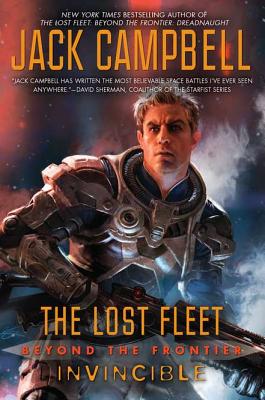 By Jack Campbell
Unavailable to Order
Out of Print

"New York Times" bestselling author Jack Cambell's space saga hits lightspeed with an action-packed story of interstellar war.
Admiral John "Black Jack" Geary earned his rank after being revived from cryogenic sleep to lead the Alliance to victory against the Syndicate Worlds. But his superiors question his loyalty to the regime. Now in command of the First Fleet, Geary is tasked with exploring the frontier beyond Syndic space, a mission he fears deliberately puts the fleet--and himself--in harm's way.
An encounter with the alien Enigmas confirms Gear'y fears. Attacked without warning, he orders the fleet to jump star systems--only to enter the crosshairs of another hostile alien armada. Ignoring all of the First Fleet's attempts to communicate peaceful intentions, this system's species send their ships into battle on suicde runs, while guarding the exiting jump point with a fortress of incalculable power.
Now, with a faction of his officers determined to eliminate this new threat despite the cost, Geary must figure out how to breech the enemy's defenses so the fleet can reach the jump point without massive casualties--and knowing that the Enigmas are most likely waiting on the other side...

"Jack Campbell" is the pseudonym for John G. Hemry, a retired Naval officer (and graduate of the U.S. Naval Academy in Annapolis). As Jack Campbell, he writes "The Lost Fleet" series of military science fiction novels. He lives with his family in Maryland.

"Jack Campbell has written the most believable space battles I've ever seen anywhere."
David Sherman, coauthor of the Starfist series