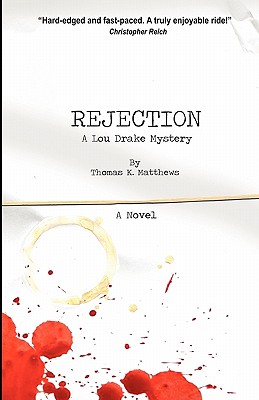 Lou Drake was once the pride of the NYPD detectives until the high profile Hennings murder case went terribly wrong, nearly ending his career. Ten years later, fifty pounds heavier and three months from retirement, Drake works patrol in the backwater borough of Malcolm New York. He spends his idle time reading crime novels and writing one of his own. When Drake breaks protocol on a foul odor call, endangering his rookie partner, Drake's captain demotes him to the booking cage. The call turns out to be a murder scene, the victim ritualistically killed. Nothing like this has ever happened in Malcolm and spooks the local police to their bones. But when another body is discovered and both victims are identified as struggling literary agents, they know they a serial killer on their hands. NYPD Chief of Detectives Smythe takes charge and launches an investigation and is shocked when another victim is discovered. The bizarre, message laden details of the killings points to somebody angry at the publishing business - especially the literary agent community. In an effort to understand what is driving the killer, Smythe decides Lou's writing experience could benefit the case and pairs him with his old partner one last time. As they look for clues in the struggling publishing industry, Drake finds himself thrust into the middle of the insane drama where a methodical perpetrator is systematically killing those who rejected him. Drake must revive his old detective prowess and trust his writer's intuition to try and solve the case, while possibly exposing the truth about the old Hennings investigation - a secret that would expose a web of corruption that could shake the NYPD to its core. Ages 18 + Publishing Industry Murder Mystery "The ultimate writer's revenge novel " Lee Child, New York Times best selling author. "REJECTION is hard edged and fast paced, it kept me guessing to the end 5 STARS " Christopher Reich, New York Times Best Selling author. "A vivid and complex character, Lou Drake writes in his spare time, writes out his betrayal and disappointment and lurks on the fringes of a writing group and eventually, writes and investigates his way into vindication. I loved this well written and twisty crime novel." Toby Neal, Amazon.com best selling author.

Thomas K. Matthews is a published author and award winning illustrator. The son of an American Literature professor he has been immersed in the written word since birth. The author of over twenty novels, Thomas lives in California with his wife and son.