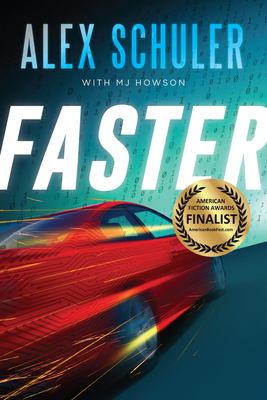 Fans of Ex Machina and I, Robot will love this book with “something to interest almost everyone.” (Screencraft)

“Faster is an exciting drama with deeply drawn and flawed characters. The action is often exciting, and many chapters are page-turners.” —Valerie W., Amazon reviewer

THE INCREDIBLE DRAMA THAT FUELED THE SELF-DRIVING CAR BOOM.

Ted is a kick-ass hardware guy who can build anything as long as you stay out of his way. He likes loud music, loud Trans Ams, and dingy bars so loud you forget how much life actually sucks. So when he’s recruited to work with a group of nerdy college roboticists to win DARPA’s autonomous vehicle challenge, he naturally has some problems playing nice with his teammates.

That is, until he’s soundly humiliated by a team led by Samantha (Sam)—a brilliant programmer with an entirely different approach to technology, and to life.

Brought together by a well-connected entrepreneur, the unlikely trio will take Silicon Valley and Detroit by storm until Ted’s reckless nature derails his relationship with Sam, gets someone killed, and nearly undermines all they’ve worked for.

Faster examines the value of progress, the cost of obsession, and the extraordinary power of the human mind, set to the backdrop of a phenomenon that would shake the world.

“The characters in “Faster” are all exceptionally strong, distinct, complex, and engaging. It delivers excitement, anxiety, humor, romance, tragedy, and despair.” —ScreenCraft

Alex Schuler began his career as a Navy pilot, then developed AI software for the commercial and defense sectors. His systems have been deployed on Navy ships and submarines, as well as NASA space shuttles. Alex turned to writing exciting and accessible science-based fiction to explore the ethical and philosophical implications of the technology he helped develop. His characters question their place and purpose in a rapidly changing world of ever-more-sophisticated—and potentially dangerous—technological advances.

Code Word Access, the first novel in Alex Schuler's Code Word series, shot to #1 on Amazon in the sci-fi category.

An early fan of Star Trek (the original, of course), The Outer Limits, and Sigourney Weaver in the Alien movies, you might find Alex wandering the halls of ComicCon or reading a great sci-fi book under redwood trees. Which book? Maybe Dune (Frank Herbert) or Stranger in a Strange Land (Robert Heinlein).