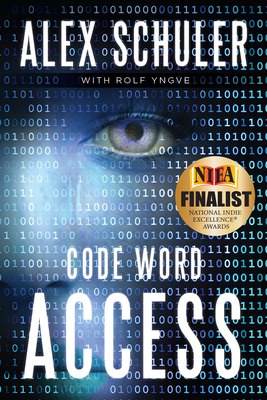 This is book number 1 in the Code Word series.

Fans of Terminator and TotalRecall will love this “extremely well-executed” book. (Screencraft)

The future is in code.

Shawn Muller is a prodigy and he knows it. It is 2051 and the militarized AI he created to hunt terrorists has begun to dominate the network that controls everything from traffic to climate. Fearful of the power of the AI he calls “Lazy Jack” and the politicians who will use it, Shawn installs an algorithm to give his creation a system of ethics.

But when that very ethical standard causes Lazy Jack to declare Shawn a profound threat to society, he is forced into terrified flight to avoid summary execution as a terrorist.

Off the grid for the first time in his twenty-seven years, Shawn will find himself pursued not only by his creation and the government it has started to control, but also by the shadowy elements of society that reject domination by AI. Captured by the outlawed Organites, Shawn falls into the hands of their charismatic captain, Destiny.

Born to be enemies, Shawn and Destiny discover that their lives and the survival of their worlds are inextricably linked. Together with a host of unforgettable characters, they will struggle to bring down the system Shawn thought would save the world, leading them to face one of the most profound questions of human existence: Will we or will our creations decide what is right and what is wrong?

“I’m usually not a big fan of science fiction stories, but the plot here grabbed hold of me and I couldn’t stop reading.” —Alias11, Amazon reviewer


For more from Alex Schuler, check out Faster.

Alex Schuler began his career as a Navy pilot, then developed AI software for the commercial and defense sectors. His systems have been deployed on Navy ships and submarines, as well as NASA space shuttles. Alex turned to writing exciting and accessible science-based fiction to explore the ethical and philosophical implications of the technology he helped develop. His characters question their place and purpose in a rapidly changing world of ever-more-sophisticated—and potentially dangerous—technological advances.

Code Word Access, the first novel in Alex Schuler's Code Word series, shot to #1 on Amazon in the sci-fi category.

An early fan of Star Trek (the original, of course), The Outer Limits, and Sigourney Weaver in the Alien movies, you might find Alex wandering the halls of ComicCon or reading a great sci-fi book under redwood trees. Which book? Maybe Dune (Frank Herbert) or Stranger in a Strange Land (Robert Heinlein).

"Excessive technological jargon occasionally interrupts the action and will likely be overwhelming for the casual reader, but the tech-savvy will be gratified by the thought-provoking details. This is a solid first outing." —Publisher's Weekly