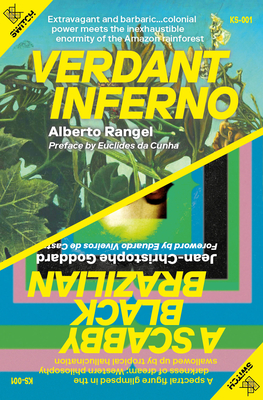 A classic of Brazilian literature is twinned with an overheated tract in which tropical delirium swallows up Western philosophy, attacking the decolonial question with poetic ferocity.

A classic of Brazilian literature is twinned with an overheated tract in which tropical delirium swallows up Western philosophy. Both attack the decolonial question with poetic ferocity, ignited by the moment when colonialist rationality meets its limits in the "magnificent disorder" of the Amazon jungle.

Described in Eduardo Viveiros de Castro’s foreword as "no longer an interpretation of Brazil but an interpenetration with Brazil," Jean-Christophe Goddard’s strange theory-fiction plunges Western philosophy into the great American schizophrenia, where its ordered categories are devored by uncontainable contaminations—first and foremost the rainforest itself, a "monstrosity unapproachable by the cogito."

In 1664, the Portuguese Bento de Espinosa wrote of his terrifying hallucination of "a scabby black Brazilian." But rather than a vision of "the Other," the dream figure was a frightful glimpse of Bento’s own duplicity. Upon adopting the "clean white nickname" of Benedict de Spinoza, the philosopher cut ties with his homeland and its colonial misadventures, repudiating this specter that flees along the lines of migration: "Spinoza is American … the journey is intensive." And in his wake, a cannibalized cast of conceptual personae are sucked into Goddard’s Pernambucan delirium: Franny Deleuze, Dina Levi-Strauss, Chaya Ohloclitorispector, Galli Mathias…

The rainforest also precipitates a deregulation of the senses in Verdant Inferno, Alberto Rangel’s classic 1904 work of Brazilian literature. In Rangel’s astonishing tales, this "poet-engineer" sent into the dark interior as a state representative records his encounters in a style that shimmers between objective documentary and visionary limit experience.

Alberto Rangel (1871–1945) was a prolific Brazilian writer who, as secretary of lands, mines, navigation, and colonization of the Amazonas State Government, recorded his experiences in the collections Inferno verde (1908) and Sombras n’água (1913). From 1907 to 1942, because of his adoption of anti-republican ideas, he lived in self-imposed exile in Europe during the two world wars, returning to Brazil in 1942.

Jean-Christophe Goddard is a professor in philosophy at Université Toulouse-Jean Jaurès. He has published a number of works on post-Kantian German Idealism and twentieth-century French philosophy. For the last twelve years his work has focused on decolonial and feminist critical theory, contemporary African philosophy, and Amazonian counter-anthropology.

Eduardo Viveiros de Castro is an internationally recognized Brazilian anthropologist whose work focuses on the indigenous peoples of the Amazon and the development of a decolonial anthropology through the concepts of "perspectivism" and the "extramodern." The author of Cannibal Metaphysics, From the Enemy’s Point of View, and The Ends of the World (with Déborah Danowski), he is currently Professor of Anthropology at the National Museum of the Federal University of Rio de Janeiro.