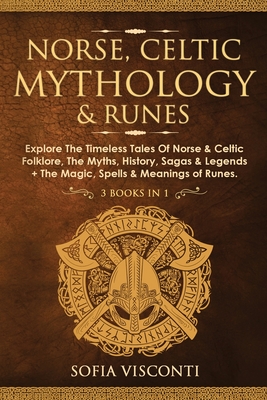 The Norse God Odin was a relentless seeker of knowledge and wisdom, willing to sacrifice almost anything for this pursuit.

Odin's hunger for wisdom is evident in many of the stories that involve him, and I invite you to share his willingness to let go of your reality and jump into the mysterious worlds of Norse & Celtic Mythology and Runes.

Included in this Captivating 3 Book Collection are:

Through the ages they have inspired poets, authors, and songwriters alike with their ancient heritage of sagas, myths, legends, and battles.

Movies and television series about their way of life have surged in popularity. What makes it so fascinating is not the stories in themselves, although some are truly a feast to the eyes, but how they came to be and what they mean for the people that live by them.

Let's drink from the well of knowledge and jump into a realm of wonder, where nothing is as it seems

By the end of this book, you will be familiar with both Norse & Celtic Mythology. Inside you will find heroic stories, myths, legends and epic tales of love and betrayal. You'll discover who they were, how they lived and how they influenced the modern world. And, of course, you'll know more about your favorite Gods & Godesses, such as how Thor got his famous hammer, Dagda Supreme God of The Celts and many more

Also in this book you will find,

Runes: A Guide To The Magic, Meanings, Spells, Divination & Rituals Of Runes

Runes are, in fact, real artifacts - stones with runic inscriptions. They have both factual and mythological roots. From German tribes, to Vikings and to New Agers, Runes have played a powerful part in history.

Inside we will unravel the mystery of Runes to examine significant facts and history that provide us with a better understanding of them and how they can enhance your life.

All This & Much More Including:

Open a door to another world.... a world of adventure, heroism, romance and mystery.

Norse, Celtic Mythology & Runes your calling has been answered with this book.