The Running Trivia Book: 1001 Questions from the Sprints to the Marathon (Hardcover) 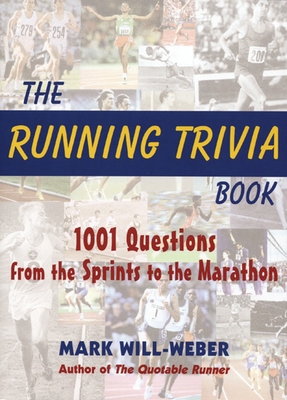 Mark Will-Weber is the genius behind The Quotable Runner, which sold over 30,000 copies in hardcover, and started the successful Quotable series. Now, in the same gift-book format, he has gathered a series of delightful trivia questions sure to entertain, perplex, and astonish everyone who loves running. The questions vary in difficulty from "Bronze" for beginners to "Gold" for the experts, with a few bonus questions even beyond Gold--brain-busters that might elude the most hardened veteran of track trivia.

Who was the first man to run four minutes for the mile?

When New Zealand's John Walker became the first man to break 3:50 in the mile at Gothenburg, Sweden, in the days of enforced amateur status, he was rewarded with a small amount of appearance money and what else?
A. An audience with King Gustav VI
B. A case of beer
C. A silver stopwatch with 3:49.4 engraved on it
D. A date with a Swedish model

(Answer: B for Beer. The Kiwi runners such as Walker and Dixon were quite fond of it.)

And there are 999 more in this ebullient celebration of running. It is all endless good fun and a sure hit among the rabid running crowd.