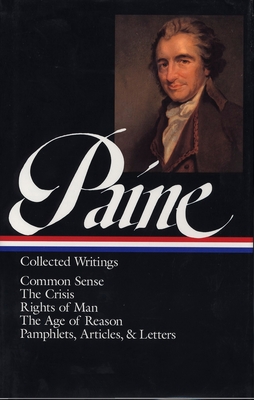 Thomas Paine was the impassioned democratic voice of the Age of Revolution, and this volume brings together his best-known works: Common Sense, The American Crisis, Rights of Man, The Age of Reason, along with a selection of letters, articles and pamphlets that emphasizes Paine's American years. “I know not whether any man in the world,” wrote John Adams in 1805, “has had more influence on its inhabitants or affairs for the last thirty years than Tom Paine.” The impassioned democratic voice of the Age of Revolution, Paine wrote for his mass audience with vigor, clarity, and “common sense.” This Library of America volume is the first major new edition of his work in 50 years, and the most comprehensive single-volume collection of his writings available. Paine came to America in 1774 at age 37 after a life of obscurity and failure in England. Within fourteen months he published Common Sense, the most influential pamphlet for the American Revolution, and began a career that would see him prosecuted in England, imprisoned and nearly executed in France, and hailed and reviled in the American nation he helped create. In Common Sense, Paine set forth an inspiring vision of an independent America as an asylum for freedom and an example of popular self-government in a world oppressed by despotism and hereditary privilege. The American Crisis, begun during “the times that try men’s souls” in 1776, is a masterpiece of popular pamphleteering in which Paine vividly reports current developments, taunts and ridicules British adversaries, and enjoins his readers to remember the immense stakes of their struggle. Among the many other items included in the volume are the combative “Forester” letters, written in a reply to a Tory critic of Common Sense, and several pieces concerning the French Revolution, including an incisive argument against executing Louis XVI. Rights of Man (1791–1792), written in response to Edmund Burke’s attacks on the French Revolution, is a bold vision of an egalitarian society founded on natural rights and unbound by tradition. Paine’s detailed proposal for government assistance to the poor inspired generations of subsequent radicals and reformers. The Age of Reason (1794–1795), Paine’s most controversial work, is an unrestrained assault on the authority of the Bible and a fervent defense of the benevolent God of deism. Included in this volume are a detailed chronology of Paine’s life, informative notes, an essay on the complex printing history of Paine’s work, and an index.

LIBRARY OF AMERICA is an independent nonprofit cultural organization founded in 1979 to preserve our nation’s literary heritage by publishing, and keeping permanently in print, America’s best and most significant writing. The Library of America series includes more than 300 volumes to date, authoritative editions that average 1,000 pages in length, feature cloth covers, sewn bindings, and ribbon markers, and are printed on premium acid-free paper that will last for centuries.

Eric Foner is DeWitt Clinton Professor of History at Columbia University and the author of Tom Paine and Revolutionary America, among many other works. His most recent book, The Fiery Trial: Abraham Lincoln and American Slavery won the Pulitzer, Bancroft, and Lincoln prizes for 2011.