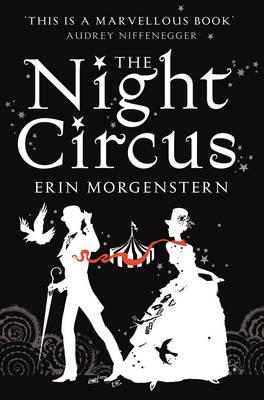 “The Night Circus can be described in so many ways; It's a love story, a mystery, a fairy tale. However one describes it, it is definitely an exercise in imagination of the finest type. Share the amazement! You will become consumed by this story until the very last word. This is the type of book that should be debated over cups of coffee-grown-cold, long, long into the night! Highly recommended.”
— Nancy Simpson-Brice, The Book Vault, Oskaloosa, IA

“This elegant debut is a striking example of a nostalgic yet modern fairy tale. When two competing magicians lay a wager as to which can mold the more powerful protege, they opt to use a fantastical traveling wonderland -- The Night Circus -- as the venue for the competition. What is meant to be a battle of magical skills evolves into something much deeper as apprentices Celia and Marco enchant not only the circus around them, but also each other. The real conflict arises when the two realize how the competition is meant to end and they set about trying to change their predestined fate. I adored diving into Morgenstern's mesmerizing world and mourned when I reached the end.”
— Whitney Spotts, Schuler Books & Music, Lansing, MI

In this mesmerizing debut, a competition between two magicians becomes a star-crossed love story.
The circus arrives at night, without warning. No announcements precede it. It is simply there, when yesterday it was not. Within nocturnal black and white striped tents awaits a unique experience, a feast for the senses, where one can get lost in a maze of clouds, meander through a lush garden made of ice, stand awestruck as a tattooed contortionist folds herself into a small glass box, and gaze in wonderment at an illusionist performing impossible feats of magic.
Welcome to Le Cirque des Reves. Beyond the smoke and mirrors, however, a fierce competition is underway - a contest between two young magicians, Celia and Marco, who have been trained since childhood to compete in "a game," in which each must use their powers of illusion to best the other. Unbeknownst to them, this game is a duel to the death, and the circus is but the stage for a remarkable battle of imagination and will.

"From the Hardcover edition."

ERIN MORGENSTERN is a writer and a multimedia artist, who describes all her work as "fairy tales in one way or another." She lives in Massachusetts with her husband and two very fluffy cats. "From the Hardcover edition."