One Thousand and One Arabian Nights: Aladdin, Ali Baba, Sinbad and the Tales of Scheherazade (Gothic Fantasy) (Hardcover) 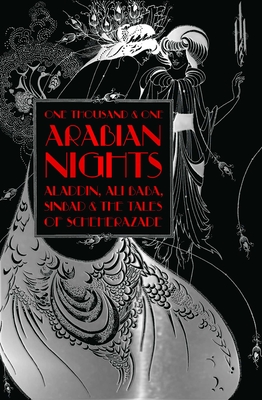 Tales of the enchanting ‘Thousand and One Nights’ have entered the folklore of the entire world but their origins lie in the Arabic and Indian oral traditions of the early middle ages. Their power to entice lies in the tenacity of the storyteller Scheherazade who weaves a new tale each night, to save herself from execution. Popular characters such as Aladdin, Ali Baba and Sinbad the sailor have become part of the Arabian Nights, added in later years, but told within the intriguing structure of the original. Such additions by were made by translators and collaborators from many European and Eastern sources but it was Richard Burton’s edition that brought these popular folk tales to the attention of a Victorian era readership eager to explore new cultures. It is Burton’s edition that forms the basis of this new collection, with stories that survive still from the original featured here too: ‘The Merchant and the Genie’, ‘The Fisherman and the Genie’, ‘The Porter and the Three Ladies’, ‘The Three Apples’.

Wen-chin Ouyang FBA is Professor of Arabic and Comparative Literature at SOAS, University of London. Born in Taiwan and raised in Libya, she completed her BA in Arabic at Tripoli University and PhD in Middle Eastern Studies at Columbia University in New York City. She is the author of Literary Criticism in Medieval Arabic-Islamic Culture: The Making of a Tradition (1997), Poetics of Love in the Arabic Novel (2012) and Politics of Nostalgia in the Arabic Novel (2013).