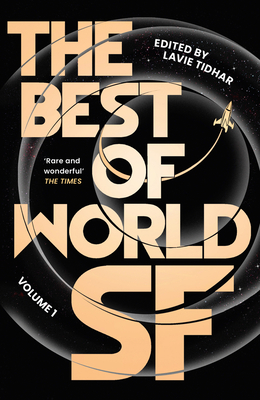 The future is coming. It knows no bounds, and neither should science fiction.

They say the more things change the more they stay the same. But over the last hundred years, science fiction has changed. Vibrant new generations of writers have sprung up across the globe, proving the old adage false. From Ghana to India, from Mexico to France, from Singapore to Cuba, they draw on their unique backgrounds and culture, changing the face of the genre one story at a time.

Prepare yourself for a journey through the wildest reaches of the imagination, to visions of Earth as it might be and the far corners of the universe. Along the way, you will meet robots and monsters, adventurers and time travelers, rogues and royalty.

In The Best of World SF, award-winning author Lavie Tidhar acts as guide and companion to a world of stories, from never-before-seen originals to award winners, from twenty-three countries and seven languages. Because the future is coming and it belongs to us all.

"Immersion" by Aliette de Bodard; "Debtless" by Chen Qiufan (trans. from Chinese by Blake Stone-Banks); "Fandom for Robots" by Vina Jie-Min Prasad; "Virtual Snapshots" by Tlotlo Tsamaase; "What The Dead Man Said" by Chinelo Onwualu; "Delhi" by Vandana Singh; "The Wheel of Samsara" by Han Song (trans. from Chinese by the author); "Xingzhou" by Yi-Sheng Ng; "Prayer" by Taiyo Fujii (trans. from Japanese by Kamil Spychalski); "The Green Ship" by Francesco Verso (trans. from Italian by Michael Colbert); "Eyes of the Crocodile" by Malena Salazar Maciá (trans. from Spanish by Toshiya Kamei); "Bootblack" by Tade Thompson; "The Emptiness in the Heart of all Things" by Fabio Fernandes; "The Sun From Both Sides" by R.S.A. Garcia; "Dump" by Cristina Jurado (trans. from Spanish by Steve Redwood); "Rue Chair" by Gerardo Horacio Porcayo (trans. from Spanish by the author); "His Master's Voice" by Hannu Rajaniemi; "Benjamin Schneider's Little Greys" by Nir Yaniv (trans. from Hebrew by Lavie Tidhar); "The Cryptid" by Emil H. Petersen (trans. from Icelandic by the author); "The Bank of Burkina Faso" by Ekaterina Sedia; "An Incomplete Guide..." by Kuzhali Manickavel; "The Old Man with The Third Hand" by Kofi Nyameye; "The Green" by Lauren Beukes; "The Last Voyage of Skidbladnir" by Karin Tidbeck; "Prime Meridian" by Silvia Moreno-Garcia; "If At First You Don't Succeed" by Zen Cho

Lavie Tidhar is the World Fantasy Award-winning author of Osama (2011), The Violent Century (2013), the Jerwood Fiction Uncovered Prize-winning A Man Lies Dreaming (2014), and the Campbell Award-winning Central Station (2016), in addition to many other works and several other awards. He works across genres, combining detective and thriller modes with poetry, science fiction, and historical and autobiographical material. His work has been compared to that of Philip K. Dick by the Guardian and the Financial Times, and to Kurt Vonnegut's by Locus.

"The range, inventiveness, and creativity among these 26 tales make a definitive case for why the doors of science fiction should be thrown open to international and translated stories. . . . A rich and well-curated collection full of surprising narratives and vast worlds that will delight any sf fan." —Bookliststarred review

"Although science fiction imagines diverse, imaginative, and frightening futures, genre anthologies rarely achieve the brilliant range and diversity of voices of The Best of World SF: Volume 1 ... The anthology brings a fresh, revolutionary perspective in that its selections are intentionally curated to suggest that the horizon is both closer and brighter than Western readers might think. Vital and exciting, The Best of World SF blows the blast panels off the dusty, well-worn tropes of popular science fiction and lets in a dazzling burst of lunar light." —Foreword Reviews

"This excellent anthology proves editor Tidhar’s assertion that science fiction should no longer be thought of as “white, male, and American” with 26 exemplary stories from 21 countries. . . . Worthwhile both as a survey of international sci-fi and on a story-by-story level, this wonderful anthology should be a hit with any sci-fi fan." —Publishers Weekly

"Stories like these are the ones you sometimes want to foist upon readers who claim not to like SF. . . . I look forward to future volumes." —Gary K. Wolfe, Locus

"This sort of international compendium — which includes the works of mostly non-white, non-famous authors from such far-flung homeworlds as Singapore, Brazil, Croatia, and the Philippines — is still something of a novelty in our timeline. Embrace the unknown." —Philadelphia Inquirer, "These Are the Hot Books of 2021"

“Tidhar is a genius at conjuring realities that are just two steps to the left of our own.” – NPR

“Tidhar changes genres with every outing, but his astounding talents guarantee something new and compelling no matter the story he tells.” – Library Journal

“In a genre entirely of his own, and quite possibly a warped genius.” – Ian McDonald, author of River of Gods

“Lavie Tidhar is one of the great writers of my generation.”.” – Silvia Moreno-Garcia, author of Mexican Gothic

“Already staked a claim as the genre’s most interesting, most bold, and most accomplished writer.” – Locus

“Tidhar is a master at taking concepts that really shouldn’t work and crafting them into something uniquely brilliant.” – GeekDad