The Complete Alien Collection: The Shadow Archive (Out of the Shadows, Sea of Sorrows, River of Pain) (Paperback) 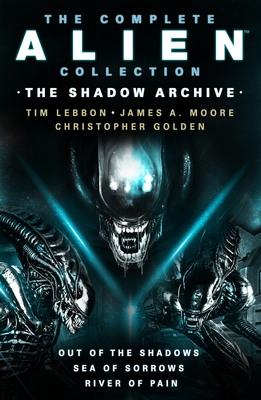 An omnibus of tightly coordinated novels revealing the terrifying events that occur between the Alien and Aliens movie hits.

Out of the Shadows by Tim Lebbon
When a shuttle crashes into the mining ship Marion, the miners learn that there was more than trimonite deep in the caverns of planet LV-178. There was evil, hibernating—and waiting for suitable prey. Quickly they discover that their only hope lies with the unlikeliest of saviours… Ellen Ripley, the last human survivor of the Nostromo.

Sea of Sorrows by James A. Moore
The Weyland-Yutani Corporation has secrets of its own, as Decker discovers when he is forced to join a team of mercenaries sent to investigate an ancient excavation. Somewhere in that long-forgotten dig lies the thing the company wants most in the universe—a living Xenomorph. Decker doesn’t understand why they need him, until his own past comes back to haunt him. Centuries ago, his ancestor fought the Aliens, launching a bloody vendetta that was never satisfied.

River of Pain by Christopher Golden
Protected by the Colonial Marines, the colonists of planet Acheron seek to terraform the storm-swept planet. Two such residents are Anne and Russell Jorden, seeking a fortune that eluded them on Earth. The wildcatters discover a vast, decaying spaceship. The horseshoe-shaped vessel is of particular interest to Weyland-Yutani, and may be the answer to their dreams. But what Anne and Russ find on board proves to the stuff, not of dreams, but of nightmares.

Tim Lebbon is a New York Times bestselling author and has written many successful movie novelizations and tie-ins for Alien and Firefly. Tim has won four British Fantasy Awards and been a finalist for the International Horror Guild and World Fantasy Awards.

James A. Moore is a Bram Stoker Award-nominated American horror novelist and author of short stories.

Christopher Golden is a New York Times bestselling author of tie-ins to Buffy, Hellboy, and X-Men.

"Lebbon’s care for words and attention to detail proves to be profoundly rewarding… This is one of the finest—if not the finest—film tie-ins I’ve read in years." — HorrorNovelReviews.com

"The action starts early, it has really fantastic characters and the writing is superb." — Tracing the Stars

"This first entry in a series of books exploring and expanding the world of Alien is quite fascinating… I personally can’t wait for the next installment and see where it goes from here." — GNN

"Lebbon is an amazing story teller… Alien: Out of the Shadows is a damn fine book and if you can sit back and enjoy this new Alien tale for what it is, you won’t be disappointed." — Ravenous Monster

"Out of the Shadows is a superbly paced blend of all the good elements of the first two films. Fans will have a blast meeting Ripley again, not to mention immersing themselves once again in the bleak, claustrophobic atmosphere of this unique mythos." — The Hellforge


Praise for James A. Moore:

"His work stands toe-to-toe with the best of King, Koontz, and McCammon." — Cemetery Dance Weekly

"Moore may be one of the best kept secrets in horror fiction, but the secret is finally getting out." —Chronicle

"Will become a classic like Stephen King’s Salem’s Lot. Moore is one of the grandmasters of the horror genre." — Midwest Book Review (for Blood Red)

"Wildwood Road is a brilliant novel of supernatural suspense that reminded me of the early classics by Ira Levin—think Rosemary’s Baby and you won’t be disappointed. This one’s a keeper." — Stephen King

"A good horror novel needs to be a good novel first, with a strong plot, interesting characters, and vivid and evocative writing. Golden delivers all of that in spades in Wildwood Road, the best ghost story I have read since… well, since the last time Stephen King wrote one." — George R. R. Martin

"A new book by Chris Golden means only one thing: the reader is in for a treat. His books are rich with texture and character, always inventive, and totally addictive." — Charles de Lint, author of Widdershins and The Onion Girl

"Golden is one of the most hard-working, smartest, and talented writers of his generation… Everything he writes glows with imagination." — Peter Straub, author of Ghost Story and The Talisman (with Stephen King)

"A master of horror… Christopher Golden proves himself to be a master of his craft… Lyric, fluid, and mesmerizing…" — SciFi.com

"Christopher Golden collides the ordinary and the supernatural with wonderfully unsettling results…" — Max Allan Collins, author, The Road to Perdition