Predator: Eyes of the Demon (Paperback) 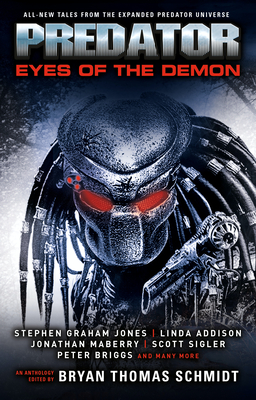 IF YOU ARE ORDERING A SIGNED COPY, PLEASE SPECIFY THE DESIRED AUTHOR SIGNATURE(S) IN THE ORDER COMMENTS:

IF NO PREFERENCE IS SPECIFIED, WE WILL PROCEED WITH YOUR ORDER FOR BOTH SIGNATURES.  DEPENDING ON THE RESPECTIVE AUTHOR'S SCHEDULES, AND THE SIGNATURES PRESENT IN OUR ON-HAND COPIES, THERE MAY BE A DELAY IN YOUR ORDER BEING READY.

A brand-new anthology with fifteen exclusive short stories offering taut and dramatic tales set on Earth and in dark reaches of space, featuring the ultimate hunters, the Yautja—also also known as Predators.

Editor Bryan Thomas Schmidt is an author of novels and short fiction, and Hugo-nominated editor. He has edited Alan Dean Foster, Tracy Hickman, Frank Herbert, was the first editor on Andy Weir's The Martian. His anthologies include Infinite Stars, Predator: If it Bleeds, Shattered Shields (with Jennifer Brozek), Beyond the Sun, Raygun Chronicles, and Mission: Tomorrow. He lives in Kansas, USA.

“There’s something in her for all Predator fans… All the shorts are varied and the authors talented. Go out and pick this book up.”—AVP Galaxy on Predator: If it Bleeds

“Get to the Bookstore! ...a solid anthology of well-written Yautja-centric stories that you won’t want to miss.”—Adventures in Poor Taste on Predator: If It Bleeds

“Super fans and casual fans alike will find a lot to offer them in these pages. [Predator: If it Bleeds] is a very tightly woven network of crazy fun and crazy violent action that will leave you wanting more.”—Hey Poor Player  on Predator: If It Bleeds