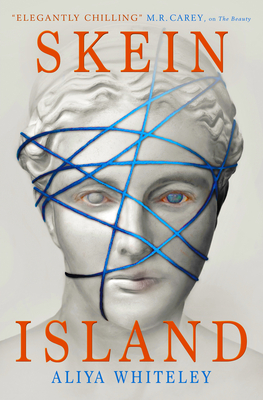 From the author of The Loosening Skin and The Beauty, Aliya Whiteley, Skein Island is a powerful and disturbing look at the roles we play, and how they form and divide us. This new edition features a brand new novelette set in the same world as Skein Island.

Skein Island, a private refuge twelve miles off the coast, lies in turbulent waters. Few receive the invitation to stay for one week, free of charge. If you are chosen, you must pay for your stay with a story from your past: a Declaration for the Island's vast library.

What happens to your Declaration after you leave the island is none of your concern.
From the monsters of Ancient Greece to the atrocities of World War II, from heroes to villains with their seers and sidekicks by their sides, Skein Island looks through the roles we play, and how they form and divide us. Powerful and disturbing, it is a story over which the characters will fight for control.

Until they realise the true enemy is the story itself.

Aliya Whiteley was born in Devon in 1974, and currently lives in West Sussex, UK. She writes novels, short stories and non-fiction and has been published in places such as The Guardian, Interzone, McSweeney's Internet Tendency, Black Static, Strange Horizons, and anthologies such as Unsung Stories' 2084 and Lonely Planet's Better than Fiction I and II. She has been shortlisted for an Arthur C. Clarke Award, Shirley Jackson Award, British Fantasy and British Science Fiction awards, the John W Campbell Award, and a James Tiptree Jr award. Her stories are unpredictable; they can be terrifying, tender, ferocious and deeply funny. She also regularly reviews film, books and television for Den of Geek.  She blogs at: aliyawhiteley.wordpress.com  and she tweets most days as @AliyaWhiteley.

I firmly believe that Aliya Whiteley is one of the most original, innovative and intelligent writers of speculative fiction working in Britain today.
– Nina Allan, author of The Rift

“Whiteley skilfully blends Greek myth with the horrors of the second world war and scalpel-sharp observations of contemporary society in a compelling, disturbing read that examines gender roles and the power of individuals to take control of their lives.”
The Guardian

“At its heart, Skein Island is a novel about storytelling, gender, and the tales we fall captive to or fool ourselves into believing. It’s about the power of the written word and, quite appropriately, Aliya Whiteley’s writing is spellbinding, blending reality and mythos together to create a world that is most terrifying when it reflects our deepest fears back at us.”
Starburst

"An inventive and haunting postmodern novel"
The Herald

“A story that is steeped in mystery and mythology – a darkly disturbing and challenging read. Skein Island is savagely honest and sharply attuned to the perils and unspoken agony of our times. Whiteley writes like a force of nature and there is no stopping this coming storm!”
Storgy best books of 2019

"Whiteley’s novel, steeped in mythology, is a lyrical journey that’s ultimately about learning to let go of the past"
Kirkus

Ginger Nuts of Horror best of 2019

We can expect great things from Aliya Whiteley.
– Rising Shadow

If you’re looking for deep waters and shadows in the pages of a summer read, come to Skein Island.
– Mookychick

PRAISE FOR THE BEAUTY

Elegantly written, balancing on the line that divides prose from poetry.
– Booklist, on The Beauty

PRAISE FOR ALIYA WHITELEY
Aliya Whiteley’s fiction scintillates with ideas, skips back and forth across genre boundaries with an ease and audacity that is glorious to behold. She is very much at the forefront of the new wave of UK genre writers
– Mark Morris

There’s something so easy about Whiteley’s prose despite constantly delivering a dense philosophical gut punch. Her characters are rich but mysterious, flawed and fascinating. The plot twists and turns, blindsiding the reader at every turn while feeling as though it could never really have gone any other way.
– British Fantasy Society