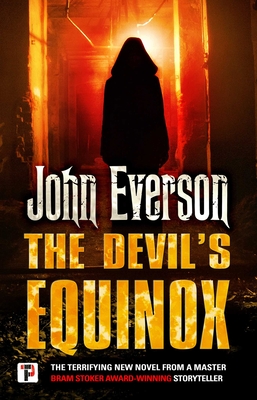 John Everson's newest novel is so powerful, so terrifying, so implacable in the evil it describes, that I could not stop reading. - The Haunted Reading Room
Austin secretly wishes his wife would drop dead. He even says so one boozy midnight at the bar to a sultry stranger with a mysterious tattoo. When his wife later introduces that stranger as Regina, their new neighbor, Austin hopes she will be a good influence on his wife. Instead, one night he comes home to find his wife dead. Soon he's entranced with Regina, who introduces him to a strange world of bloodletting, rituals and magic. A world that puts everything he loves in peril. Can Austin save his daughter, and himself, before the planets align for the Devil's Equinox? FLAME TREE PRESS is the new fiction imprint of Flame Tree Publishing. Launched in 2018 the list brings together brilliant new authors and the more established; the award winners, and exciting, original voices.

John Everson is a staunch advocate for the culinary joys of the jalapeno and an unabashed fan of 1970s European horror cinema. He is also the Bram Stoker Award-winning author of Covenant and its two sequels, Sacrifice and Redemption, as well as six other novels, including the erotic horror tour de force and Bram Stoker Award finalist NightWhere and the seductive backwoods tale of The Family Tree. Other novels include The Pumpkin Man, Siren, The 13th and the spider-driven Violet Eyes. Over the past 25 years, his short fiction has appeared in more than 75 magazines and anthologies and received a number of critical accolades, including frequent Honorable Mentions in the Year's Best Fantasy & Horror anthology series. His story "Letting Go" was a Bram Stoker Award finalist in 2007 and "The Pumpkin Man" was included in the anthology All American Horror: The Best of the First Decade of the 21st Century. In addition to his own twisted worlds, he has also written stories in shared universes, including The Vampire Diaries and Jonathan Maberry's V-Wars series, as well as for Kolchak: The Night Stalker and The Green Hornet. AWARDS: Covenant - HWA Bram Stoker Award for First Novel, 2005 Letting Go - Bram Stoker Award Finalist, Short Fiction, 2007 NightWhere - Bram Stoker Award Finalist, Novel, 2013