Shelter: The Aftermath Book One (Paperback) 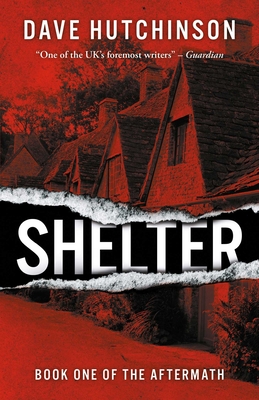 A stunning, post-apocalyptic vision of the future as humanity strives to rebuild civilisation in a world ravaged by climate change.

The Long Autumn is coming to an end. For almost a century after the coming of The Sisters, the surviving peoples of rainswept England have huddled in small communities and on isolated farms, scavenging the remains of the old society. But now society, of a kind, is starting to rebuild itself. In Kent, a brutal tyranny is starting to look West. In the Cotswolds, something terrible and only vaguely-glimpsed is happening. And in a little corner of Berkshire two families are at war with each other. After decades of simply trying to survive, the battle to inherit this brutal new world is beginning.

Dave Hutchinson is the multi-award winning author of the critically acclaimed Fractured Europe series for Solaris: Europe at Autumn, Europe in Winter, Europe at Midnight and Europe at Dawn.

"Hutchinson does a superb job of illustrating how the ruin of the world has brought about the ruin of humanity. This is an old form made new, because it speaks to our current doubts and uncertainties, our unease at the way the world is going, our fear that sense will not prevail." -- Paul Kincaid, Locus

"Dave Hutchison’s writing in this novel is as good as any of his earlier work. If you haven’t read anything by him before, I would strongly urge you to check this out. Shelter is the ideal place to start." -- www.theeloquentpage.co.uk

"Shelter is a triumph, a dark, vivid story of life in future England, beautifully bleak, rich and rewarding." -- sfbook.com

"Shelter is a beautifully crafted story of life when technology and the comforts of contemporary life have been abandoned as unnecessary and unrealistic and where the best the characters can hope for it to wake up the next morning." -- britishfantasysociety.org

"Hutchinson’s characters feel so very real. He’s got a fine eye for human details. Which makes Shelter so engaging. Troubling times require a thorough examination. Shelter is such an entertaining scrutiny." -- geeksyndicate.co.uk

"If you enjoy the quiet apocalypse stories of John Wyndham, you’ll find this a very enjoyable tale. The destruction by the comet is fascinating but it’s the consequences of such an event on society where the true horror lies. You may find yourself looking at your neighbours and friends around the street and wondering what would happen if the lights went out forever…" -- runalongtheshelves.net

"Dave Hutchinson continues to be one of the most exciting and soulful writers of contemporary science fiction." --

"With Europe at Dawn, Dave Hutchinson brings his magnificent Fractured Europe series to an end and cements his position as one of the UK s foremost writers. Hutchinson s Europe, splintered into a thousand bickering new states, is strangely haunted by an alternative reality ruled by a stiflingly small-c conservative 'Community.' I consider this series the best fictional response to Brexit yet published, and Europe at Dawn is a superbly judged conclusion. --The Guardian

"Mind-bending, smart, human, with espionage thrills wrapped up in a reality-altering Europe, all told with sparkling prose and wit." --Patrick Ness

"Hutchinson brings his magnificent Fractured Europe series to an end and cements his position as one of the UK's foremost writers." --Adam Roberts