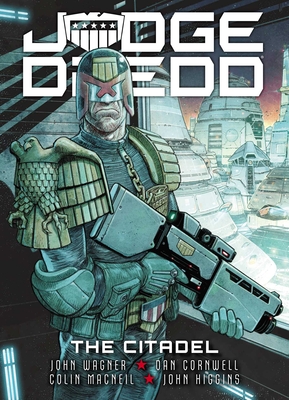 The explosive and revelatory Judge Dredd graphic novel, re-examines events of the popular Judge Dredd: The Apocalypse War from a new angle.

The Apocalypse War rages and Judge Dredd leads a squad of Cadet Judges into battle, launching an assault upon The Citadel, where Sov forces have set up base. But now, 40 years later, former Cadet Judge Winterton, on the day of his execution, will tell the truth about what happened during the Apocalypse War, why the mission was subsequently covered up, and the secret that Judge Dredd himself has been hiding for the past 40 years.

John Wagner has been scripting for 2000 AD for more years than he cares to remember. His creations include Judge Dredd, Strontium Dog, Ace Trucking, Al’s Baby, Button Man and Mean Machine. Outside of 2000 AD his credits include Star Wars, Lobo, The Punisher and the critically acclaimed A History of Violence.

Comic artist and illustrator based on the south coast of England. Early work was on titles such as Futurequake, Dogbreath, 100% Biodegradable. Big break came in 2014 when John Wagner and Alan Grant spotted his work and offered him the chance to illustrate a new sci-fi comic called Rok of the Reds. Since then he's worked on characters including Judge Dredd, Judge Fear, Max Normal and others for 2000AD and Judge Dredd The Megazine. Also illustrated Dredd for the Cursed Earth card game and Crime Files mobile game. Recent work includes the critically acclaimed sequel to Rok of the Reds - Rok the God, again written by John Wagner, and Roy of the Rovers illustrations for their fiction novels. Continues to work with 2000AD on stories including the upcoming series Department K and a new John Wagner Judge Dredd story. He is also working with former Tharg - Steve MacManus on his latest comic Blazer!

Since joining 2000 AD in 1986 Colin MacNeil has worked on many strips, including Chopper: Song of the Surfer and the infamous death of Johnny Alpha in Strontium Dog: The Final Solution. He went on to collaborate with John Wagner on the award-winning America for the Judge Dredd Megazine. He has also worked on Shimura, Maelstrom and Fiends of the Eastern Front: Stalingrad, and, outside of the Galaxy’s Greatest Comic, provided the atmospheric artwork on Bloodquest for Games Workshop. He also enjoys creating large abstract paintings. He says it’s art therapy!

John Higgins is a multi-talented 2000 AD artist and writer; as well as scripting a Future Shock and Judge Dredd, Higgins has illustrated Chopper, Freaks, One-Offs, Tharg the Mighty and Time Twisters. His work outside the Galaxy’s Greatest Comic is also highly respected, and he has contributed to some of the most important series of recent times, including working as a colourist on the modern superhero classic Watchmen, and on Vertigo’s Animal Man, Hellblazer and Pride and Joy.