Forever and a Death (Hardcover) 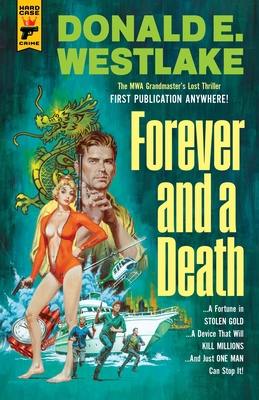 The Bond That Never Was

Two decades ago, the producers of the James Bond movies hired legendary crime novelist Donald E. Westlake to come up with a story for the next Bond film. The plot Westlake dreamed up – about a Western businessman seeking revenge after being kicked out of Hong Kong when the island was returned to Chinese rule – had all the elements of a classic Bond adventure, but political concerns kept it from being made. Never one to let a good story go to waste, Westlake wrote an original novel based on the premise instead – a novel he never published while he was alive.

Now, nearly a decade after Westlake’s death, Hard Case Crime is proud to give that novel its first publication ever, together with a brand new afterword by one of the movie producers describing the project’s genesis, and to give fans their first taste of the Westlake-scripted Bond that might have been.

Donald E. Westlake is widely regarded as one of the great crime writers of the 20th Century. He won three Edgar Awards and was named a Grandmaster by the Mystery Writers of America.  Many of his books have been made into movies; Westlake also wrote the screenplay for "The Grifters," for which he received an Academy Award nomination.

"The orange wetsuit, that gun pose, the comma of hair above the eye - stop twisting my arm, Hard Case!” -  Birth. Movies. Death

“There are real Bond villains in this ever-changing world in which we live in.  But there is no James Bond.  It’s up to us to stop them.  Or join them.  Or be destroyed and/or ruled by them.  There are no other choices." -The Westlake Review

"great fun to read...and speculate on what a Westlake-written Bond movie might have been like. A newly discovered novel by one of the true grand masters of the genre is always a cause for celebration." - Booklist

"This is not the first time Hard Case Crime has published a neglected or forgotten work by Westlake. So we are again in their debt for gracing us with another reason to both mourn the loss and celebrate this incredibly talented author – and spend another few hours in his creative company." - Bookgasm

“it’s a bitch that we didn’t get a Donald Westlake James Bond film starring Pierce Brosnan, but for me, we got something even better…a brand-new Westlake novel.” Criminal Element

"An excellent thriller that, paired with the afterword, offers a revealing look at the inner workings of the Bond machine and there are certainly plenty of us who care about that. It’s also a must-read for Westlake fans." - Military.com

"FOREVER AND A DEATH is worthy of an audience beyond Westlake completists. Even if Westlake is treading in somewhat unfamiliar waters here, his trademark setups are present, and frequently so." - BookReporter

“Highly recommended and one of the best reads of 2017”  Borg.com