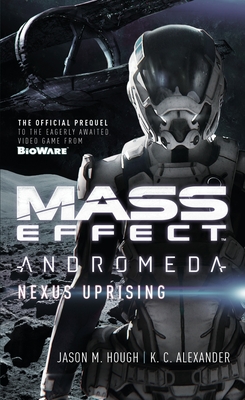 Titan Books will work closely with acclaimed video game developer BioWare to publish three brand new novels set in the universe of MASS EFFECT(TM): ANDROMEDA. The action will weave directly into the new game, chronicling storylines developed in close collaboration with the BioWare game team. The action takes place concurrently with the adventure of the game itself, setting up the story and events of the game adding depth and detail to the canonical MASS EFFECT saga.

Jason M. Hough is the New York Times bestselling author of the Darwin Elevator series and Zero World, published in the UK by Titan Books. He has been a 3D artist, animator, and game designer for Metal Fatigue, Aliens vs. Predator, and others.

K. C. Alexander is the author of Necrotech, an aggressive transhumanist sci-fi, and co-author of Mass Effect: Andromeda: Nexus Uprising.

“I feel it compliments the game so perfectly that the two both must be consumed to fully appreciate the narrative of the new Mass Effect franchise.”  Entertainment Buddha

“it’s been a long time since I’ve been so engaged in a book that I stayed up late to finish it, but when I got half way through, I simply had to know more” Biblio Sanctum

“I was not expecting the sudden action of the first chapter...I suddenly didn’t want to stop reading.”
Black Girl Nerds