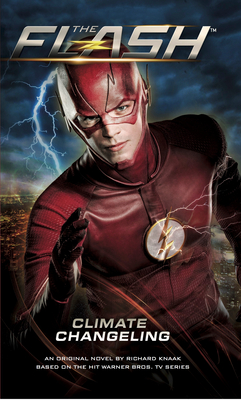 One of the Flash's deadliest foes--the Weather Wizard--returns to kill Joe West and the Scarlet Speedster. Will he unleash a far greater evil?

Months ago, Joe West's timely intervention saved the Flash from being murdered by meta-human Clyde Mardon. Clyde was killed and his elder brother Mark, the Weather Wizard, was incarcerated in Iron Heights prison, furious, bitter, and desperate for revenge... As storms gather over Central City, a mysterious spectre who looks just like the deceased Clyde quickens his brother's escape. With one of Central City's most feared villains on the loose, Barry Allen and the team at S.T.A.R. Labs race to track him down before he can take catastrophic vengeance on the entire metropolis.

Richard Knaak worked as a warehouseman, resume writer, and office clerk before becoming a full-time freelance writer. He is the bestselling author of the Dragonlance, Dragonrealm, Diablo, and Warcraft novels, as well as originals such as Dutchman, Ruby Flames, and Beastmaster: Myth.