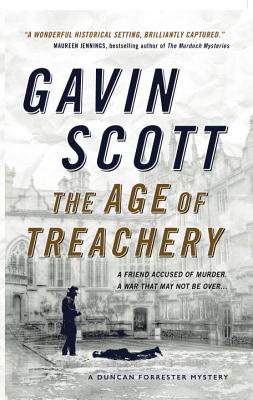 By Gavin Scott
Unavailable to Order
Out of Print

It is the winter of 1946, and after years of war, ex-Special Operations Executive agent Duncan Forrester is back at his Oxford college as a junior Ancient History Fellow. But his peace is shattered when a much-disliked Fellow is found dead in the quad, stabbed and pushed from an upper window. A don is suspected and arrested for the murder, but Forrester is not convinced of his friend’s guilt. On the hunt for the true killer, he finds himself plunged into a mystery involving lost Viking sagas, Satanic rituals and wartime espionage.

Gavin Scott is a British Hollywood screenwriter who spent twenty years as a radio and television reporter for BBC and ITN, and has worked in film and television with Steven Spielberg and George Lucas. His films include Small Soldiers and The Borrowers; among his television series are The Young Indiana Jones Chronicles and War and Peace: his next project is Dunkirk for Working Title. He lives in California.

"References to J.R.R. Tolkien and C.S. Lewis ground this book firmly in the postwar period in Oxford. Forrester has to cast aside his PTSD and rely on the skills developed from his espionage experience to ferret out the culprit and motive. A dashing new hero has been born; recommend for readers of Jack Higgins and Joseph Kanon." - Library Journal starred review


“A wonderful book that opens so many intriguing doors into Britain’s recent past.” - TERRY JONES (Monty Python)

“Hugely entertaining: An intelligent, fast moving whodunit set in the depths of a post-war winter. Packed with satisfying twists and turns as the plot moves from snow bound Oxford to Berlin and on to Norway, Fans of Morse will love it! Intelligently plotted and elegantly written, it will delight mystery fans.” - MARK OLDFIELD, bestselling author of THE SENTINEL


“A wonderful historical setting; Gavin Scott brilliantly captures this unsettled time. The writing is elegant throughout and the character of Forrester is most appealing. A most enjoyable read.” - MAUREEN JENNINGS, bestselling author of THE MURDOCH MYSTERIES


“A suspenseful murder mystery that holds the reader’s interest to the last page. This one is a page turner.” - MICHAEL KURLAND, author of THE INFERNAL DEVICE

“Packed with historical detail and people, and with a satisfyingly complex series of mysteries to solve” - The Crime Review

“At times, reading his (Scott’s) descriptions of the European cityscape, in particular, I kept flashing on scenes from Carol Reed’s The Third Man.” - Blog Critics