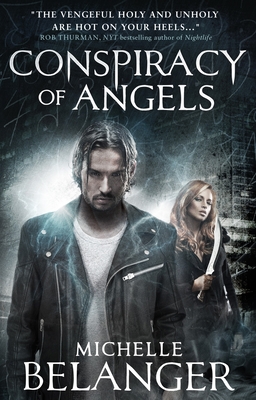 This is book number 1 in the Shadowside series.

When Zachary Westland regains consciousness on the winter shores of Lake Erie, his memories are gone. All he has are chaotic visions of violence and death… and a business card for Club Heaven. There Zack finds the six-foot-six transexual decimus known as Saliriel, and begins to learn what has happened.

Alarming details emerge, of angelic tribes trapped on Earth and struggling in the wake of the Blood Wars. Anakim, Nephilim, Gibburim, and Rephaim—there has been an uneasy peace for centuries, but the truce is at an end.

With the help of his “sibling” Remiel and Lilianna, the lady of beasts, Zack must stem the bloodshed before it cannot be stopped. Yet if he dies again, it may be for the final time.

Michelle Belanger is a nonfiction author, a member of the vampire community, and a psychic seen regularly on the television series Paranormal State. She’s been featured on programs on HBO, the History Channel, and CNN Headline News, and teaches classes around the country on dreamwalking, energy exchange, and spirit communication.

“Lovers of urban fantasy, biblical mythology, and mystery enthusiasts will find plenty to like in Conspiracy of Angels.” - Open Book Society

"Belanger’s writing shows real grit and Conspiracy of Angels doesn’t shy away from delving into horrors that will send a chill up the your spine." - The Absolute

"This story is a fast-paced, roller coaster through a fascinating world...truly entertaining." -  Impedimenta magazine

“The greatest strength of the novel is Belanger’s excellent characterisation, particularly of her female characters.  I especially loved Saliriel. Firstly, because she is so wonderfully Machiavellian and you are never quite certain as to where her true allegiances lie...Secondly, because Belanger has taken the bold decision to include a transgender woman as a main character and to make her scheming and manipulations a more prominent feature of her character than her gender identity.” - Mugglenet

“This is an urban fantasy that slides right into your head and doesn’t let go.” - Bookie Monster