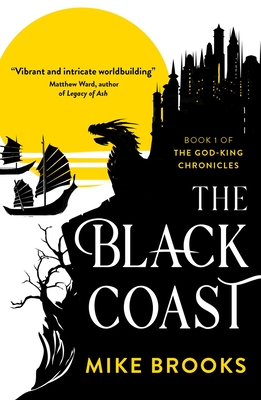 This is book number 1 in the God-King Chronicles series.

“Any fan of epic fantasy will find something to love here.” -- Publishers Weekly, starred review

War Dragons. Fearsome Raiders. A Daemonic Warlord on the Rise.

When the citizens of Black Keep see ships on the horizon, terror takes them because they know who is coming: for generations, the keep has been raided by the fearsome clanspeople of Tjakorsha. Saddling their war dragons, Black Keep’s warriors rush to defend their home only to discover that the clanspeople have not come to pillage at all. Driven from their own land by a daemonic despot who prophesises the end of the world, the raiders come
in search of a new home . . .

Meanwhile the wider continent of Narida is lurching toward war. Black Keep is about to be caught in the crossfire – if only its new mismatched society can survive.

Epic world-building at its finest, in an upcoming author’s fantasy debut. The Black Coast is the start of an unmissable series filled with war-dragons, armoured knights, sea-faring raiders, dangerous magic and crowd-pleasing battle scenes.

“The Black Coast has excellent characters and wonderful world-building, with a wealth of interesting cultural collisions. I’m already excited for the next one!” -- Django Wexler, author of The Shadow Campaigns series.

Mike Brooks was born in Ipswich, Suffolk and now lives in Nottingham with his wife, cats, snakes and a collection of tropical fish, where – when he's not playing guitar with his punk band, or DJing wherever anyone will tolerate him - he works for a homelessness charity. He is the author of three science fiction novels, Dark Run, Dark Sky and Dark Deeds, and various works for Black Library.

From the very first pages, you just know that The Black Coast is something very special in fantasy – a novel that celebrates goodness in dark times, but that nevertheless never forgets the joy of a good brawl. Mike’s ambition and imagination in these novels is as epic as the world he creates. Readers are going to love this.”

“…if you’re looking for a Firefly-like tale, filled with characters like Damian Frey and the crew of the Ketty Jay, you won’t be disappointed with this one. A quick read, but an immensely entertaining one.”
— SFF World on Dark Run

“…a story which rockets from drama to drama, leaving the reader breathless. At the end of the day, it’s a lot of fun, and as such, worth reading.”
— SF and F Reviews on Dark Run

“In Brooks’s fantastic third space adventure… the bonds among the crew continue to be a high point of the writing, as are Brooks’s terrific action sequences, particularly those highlighting Rourke’s fighting skills.”
— Publisher’s Weekly on Dark Deeds (starred review)

“This series is pure gonzo fun, and watching the Keiko crew pull off one improbable job after another never gets old.”
— Barnes & Noble

“The Black Coast has excellent characters and wonderful world-building, with a wealth of interesting cultural collisions. I’m already excited for the next one!”
— Django Wexler, author of The Shadow Campaigns series.

“Any fan of epic fantasy will find something to love here.”
— Publishers Weekly, starred review