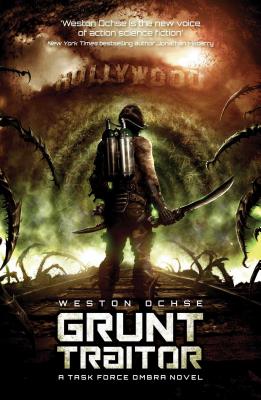 This is book number 2 in the A Task Force OMBRA Novel series.

Their spies were among us for years. They mapped our electrical infrastructure, learned our weaknesses, until finally they flipped the switch and threw us back into the Dark Ages. Only OMBRA and its battalions around the world seem capable of defending Earth from the next wave of attack-terraforming. But at what price can we gain our freedom from these yet to be identified aliens? They're pushing the human race to the edge of extinction if we can't find a way to change things. But what will we have to change? What will we humans become to survive this threat. This is a time for heroes. For killers. For Grunts. Benjamin Carter Mason will be asked this question over and over as he dives deep into the nasty heart of an alien transformed Los Angeles. And in the end, he might be the last person on Earth defending not just our lives, but our humanity.

WESTON OCHSE is a writer of nearly thirty books in multiple genres. His young adult novel Ghost Heart, co-written with Yvonne Navarro, has been compared to both The Dark Tower and Something Wicked This Way Comes. His military supernatural series SEAL Team 666 has been optioned to be a movie starring Dwayne Johnson and his military sci fi trilogy, which starts with Grunt Life, has been praised for its PTSD-positive depiction of soldiers at peace and at war. Weston has also published literary fiction, poetry, comics, and non-fiction articles. His shorter work has appeared in DC Comics, IDW Comics, Soldier of Fortune Magazine, Cemetery Dance, and peered literary journals. His franchise work includes the X-Files, Predator, Aliens, Hellboy, Clive Barker’s Midian, and V-Wars. Weston holds a Master of Fine Arts in Creative Writing and teaches at Southern New Hampshire University. When he's not being deployed to Afghanistan, he lives in Arizona with his wife, and fellow author, Yvonne Navarro and their Great Danes.